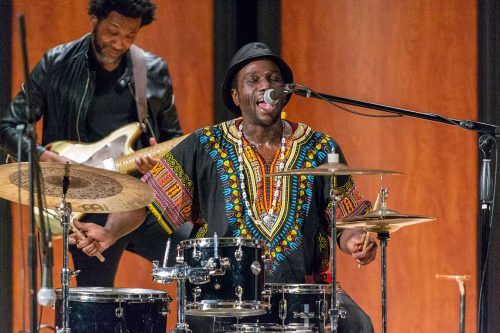 Drummer Lyndon Rochelle plays a powerful rendition of “Thank You Lord for All You Do” after explaining that he has chronic pain and epilepsy. He was accompanied by his jazz band Sunday at Morgan Auditorium. / photo by Molly Garry.

Lyndon Rochelle and his band, The Rochelle Experience, moved many audience members to tears with spiritual gospel music at their performance Sunday in the Morgan Auditorium.

Audience members were shouting, singing, dancing, crying and clapping as they felt the power of the performance.

On stage, Rochelle sang and played the drums while he welcomed Kenneth Crouch on piano, Joel Whitley on guitar, Jerohn Garnett on bass and vocal group SSK.

“That music uplifted my soul, and I love gospel music,” said Jane Beal, associate professor of English British literature. “I had a hard day and it was not completely easy for me, but coming and listening to the music that focuses on courage helped.”

Rochelle opened up with a song titled “Moaning,” which he related back to his enslaved ancestors. Rochelle said that music helped the enslaved people get through hardships because they would hum to songs as a way to help pass time during their difficult work day.

The singers, pianist and drummers kept an upbeat rhythm throughout the performance.

Many audience members agreed with Rochelle as they were nodding their heads while he spoke about the mistreatment of his ancestors and the hardships they endured, but how they used spirituals to persevere.

“They have appropriated a message and used it for liberation and empowerment. That is exactly what spirituals are meant to do,” Elaine Padilla, associate professor of philosophy and religion, said.

“Spirituals are meant to take a message and empower you, inspire you and liberate you from oppression and injustice.”

The SSK vocalists introduced the song “Bless that Wonderful Name of Jesus.” It was clear the audience enjoyed the piece as people were seen dancing, jumping and clapping along.

“I wanted to dance,” Jesus Ramirez, freshman world languages major, said. “The music was so rhythmic and had so much energy. If I was not so shy I would have gotten up and danced.”

Garnett also sang “How Great is Our God.”

In response to the powerful song, some audience members cried while others swayed back and forth with their hands in the air.

“The music was spiritual music that is meant to touch your spirit, and really was something that touched my spirit and really spoke to me at the deepest level,” said Padilla.

The last song Rochelle played was “Thank You Lord for All You Do.”

Rochelle chose this song because he suffers from chronic pain and epilepsy, something he said he would not have gotten through without the help of God by his side.

Rochelle gave an inspiring speech about how one should be thankful for everything that they have even if they are going through troubling times because of the plan God has for them.

“The music made me feel happy, it was very exciting and really emphasized the message of thankfulness,” Hanien Samara, junior biology major, said.

Michael Ryan and Friends will perform at the next Sundays at the Morgan concert March 10 from 6 p.m. to 8 p.m.

Hannah Rogers can be reached at hannah.rogers@laverne.edu.