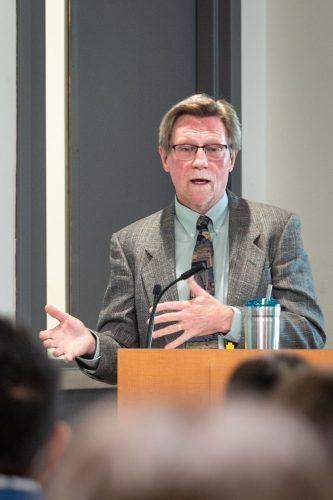 Associate Professor of Psychology Rick Rogers spoke Tuesday in the Executive Dining Room. Rogers started as an adjunct professor at the University of La Verne in 1988. Rogers led a research project on student military veterans, which helped efforts to establish a University Office of Veteran Students Success. He also served as director of the Counseling and Psychological Services center. / photo by Molly Garry

Rogers has worked at the University since 1988 when he started as a part-time as a counselor with Counseling and Psychological Services and as an adjunct professor.

During his lecture Rogers took the audience on a journey through his childhood, his counseling career and his psychological studies.

Rogers had several jobs throughout his life, including working as a farm hand, a delivery driver and a paper boy, he told the audience.

Rogers said it took him some time to figure out that he wanted to pursue an education and career in psychology, he said.

After graduating from Arizona State University in 1974 with degree social welfare, and a minor in psychology, he earned his master’s degree in marriage and family counseling.

Soon after, he received his doctorate in counseling and guidance.

Rogers began his career in counseling at Arizona Baptist Children’s Services in Phoenix.

Eventually he found himself at ULV where retired chair of the Behavioral Science Division Aghop Der Karabetian hired him as an adjunct professor and director of counseling services.

In 2001 Rogers taught graduate students as a full-time professor.

“He was there when we needed somebody who could help these students get good counseling and improve their mental health,” Der Karabetian said.

In retirement from the University, Rogers said he plans to continue his private practice, and attend the Claremont Avenues for Lifelong Learning Program.

“I want my students to keep growing, keep learning, and keep building their skills and confidence,” Rogers said.