By Anthony Eramya, Mya-Lin Lewis on February 28, 2020 in Basketball, Sports 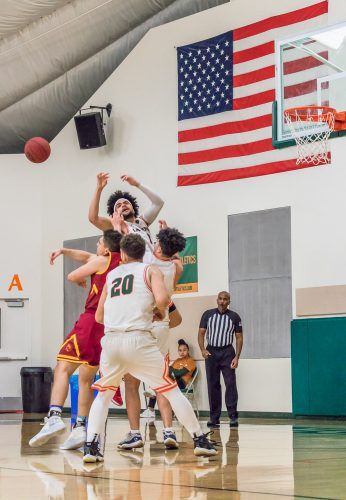 Leopards sophomore guard Isaiah Knox jumps to the defense with his teammates, junior guard Tevin McClain and sophomore guard Sinai Enoch in their game against the Stags last Saturday. / photo by Mya-Lin Lewis

The La Verne Leopards fell to the Claremont-Mudd-Scripps Stags 66-56 Saturday at the Frantz Athletic Court.

Senior forward Jarid Taylor was honored before the game for his illustrious four-year basketball career at the University.

“There were some moments where it was tough and hard but a lot of people helped me and supported me through these four years” Taylor said, “It’s honestly a memorable experience and something I’ll remember for the rest of my life.”

Despite foul trouble in the game, Taylor put up 17 points and 11 rebounds.

Taylor has been a constant for the Leopards over his four-year basketball career, averaging 5.3 points per game while maintaining a 64.5 percent shooting average.

The crowd was amped up for Taylor’s last home game and a handful of former Leopard basketball players showed up to the game to support their former teammate.

The alumni danced after a Taylor three pointer and started heckling the other team after Taylor’s hop step for a basket.

Enoch took two big falls in the first half of the game, including one where he came off the court clutching his shoulder, though luckily for the Leopards, he came back after both falls.

“I’m not going to lie I feel a little beat up and tired, but it was just a rough game,” Enoch said. “That’s how (Claremont) is, they’re a physical team.”

The biggest highlight of the game was sophomore forward Tyler Ridley making a tremendous block against the backboard in the first half, one of four he had in the game.

“Without a rim protector nobody is going to be intimidated to go down the lane. I feel like after I blocked a few shots they for sure were second guessing themselves,” Ridley said.

The Leopards closed the season with a 103-73 loss to Redlands on Tuesday, bringing their final overall record to 2-23 overall and 2-14 in the Southern California Intercollegiate Athletic Conference.

Ridley is look forward to next season.

“Next season, coming back stronger, we should have everyone returning, probably get a couple new guys. We’re just going to be a stronger, better, older team. Right now we’re young but as time goes on we’ll be better. We’re fine,” he said.