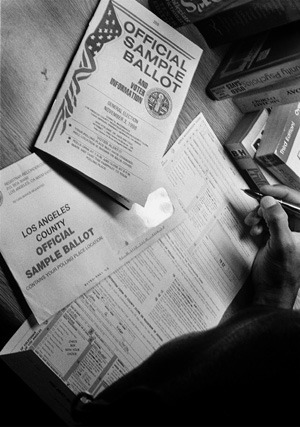 by Jennifer Parsons
Editor in Chief

With elections just around the corner (Nov. 3), it is necessary for the University of La Verne community to be well-informed of propositions and candidates that will ultimately influence and structure laws and society.

Everyone of the legal voting age of 18 who is registered should take advantage of the freedom to vote. Each ballot affects overall election results. According to the Los Angeles Times this month, the independent Field Poll predicted that only 44 percent of the state’s eligible voters will vote. This means that 44 percent of the voting population is making decisions as to who will take seats in our government and what laws all citizens will abide by.

However, not everyone takes the time and effort to read through the California Voter Information Guide Ballot Pamphlet, where the information can be found in extensive detail.

Even though the deadline to register to vote has passed, the provided information should still be read and looked into, because with knowledge and understanding of the 1998 elections, others can be educated and influenced to make good decisions as well.

• Directs Legislature to allow repair or replacement of environmentally contaminated property or structures, without increasing the value of the tax of the original or replacement property.

• Requires loans of transportation-related revenues to the General Fund be repaid the same fiscal year, with exceptions.

• Designates local transportation funds as trust funds and prohibits abolition of all such funds created by law.

• Limits voting for such delegates to voters registered by party affiliation.

• Restricts voting of such partisan ballots to members of the particular political party.

• Prohibits trapping fur-bearing or non-game mammals with specific traps for recreation or commerce in fur.; prohibits selling and buying raw fur of such mammals trapped with specified traps in California; prohibits steel-jawed leghold traps on mammals, with some exceptions; and prohibits specified poisoning of animals. Provides misdemeanor penalties.

• Specifies terms and conditions of mandatory contract between state and Indian tribes for gambling on tribal land.

Proposition 6
Criminal Law. Prohibition Slaughter of Horses and Sale of Horsemeat for Consumption.

• Authorizes $218 million in state tax credits annually, until January 2011, to encourage air emissions reductions through acquisition, conversion, and retrofitting of vehicles and equipment.

• Schools are eligible for funding only if they establish governing council of parents and teachers to consult with principal.

• Creates immediate suspension of pupil with possession of drugs.

• Creates state and county commissions to provide information and materials to establish programs for early childhood development and smoking prevention.

She is a former Teamster and is active in the Antique Motorcycle Club of America. She supports Congressional sanctions against Turkey for blockading Armenia and the right to self-determination of nations.

Beltran opposes motorcycle helmet laws and “NAFTA, unless it includes union rights and environmental safeguards.” She believes in integrating immigrants as productive Americans. She has defended abortion clinics supporting Enforcement of Freedom of Access to Clinic Entrances.

Brown says he will repeal laws such as the federal income tax; not pass new ones. He stands behind the abolishment of the IRS.

He says he opposes drug prohibition, and feels that protection of violent criminals is more important than non-violent drug offenses.

Boxer puts children and families first. She believes balancing the budget will get our economy “back on track.” Boxer worked to pass a crime law that put 9,000 new community police on California streets; she stopped special interests trying to roll back environmental laws. Boxer is working to reduce class sizes and she voted for tough penalties for dealers who sell drugs to children in school zones. She says she believes that government should not interfere with laws that protect a woman’s right to choose.

As California State Treasurer, Fong has helped saved taxpayers over $240 million through common sense reforms. He also helped to eliminate wasteful government spending. As senator, he will be a voice for taxpayers and families.

Fong wants to end early prison releases for violent offenders. His top priority is to “ensure that every child graduating from high school can read, write and speak English proficiently.

Erich believes in common sense reform and said “our society must focus on the basics of providing all Americans with sufficient levels of social security, medical care and educational opportunity.”

He does not accept monetary contributions, spent the least amount of money possible on a serious campaign and makes only one promise – to do his best to “represent the people of California and the nation as a whole.”

He believes “government should be based on that which works; not that which is politically expedient, or is bought and paid for by moneyed special interests.”

As senator, Perrin will dedicate his statesmanship to “renewing your God-given heritage of individual freedom, because the sole purpose of government is to protect your American liberties.”

He says he will help to end the cycle of creating oppressive federal laws. He votes to keep tax dollars in the United States, rather than paying for NATO expansion.

Bloomfield is a Yale-trained psychiatrist, specializing in integrative psychiatry and natural medicine and frequently speaks at conferences worldwide. The Natural Law Party supports preventive health programs, which he believes is the key to improving health, education and prosperity of all Californians.

Kubby promises to protect all Californian’s rights. He will eliminate income taxes and give affordable alternative health care options.

As Attorney General, he feels that the government’s first duty is public safety. He promises to “appoint common sense judges who recognize the rights of crime victims.” Lungren will also fight for “top-to-bottom” education reform.

Her campaign will mobilize to defend labor and immigrant rights. She strongly supports bilingual education and affirmative action; she opposes U.S. intervention abroad.

His top priority as Governor will be to “dramatically improve our public schools.” He plans to hold students, teachers, parents and the government accountable. He is for the death penalty, will protect our neighborhoods by keeping weapons off the street and will continue to fighting to protect a woman’s right to choose.

Stands for social justice and human dignity and abolition of the death penalty. He believes in the decriminalization of marijuana and legalizing cultivation of hemp; and is committed to protecting the environment and ending hunger and homelessness.

Johnson is pro-life and will work to end abortion in California. He supports the Second Amendment guaranteeing “the right of the people to keep and bear arms shall not be infringed.”

He is pro-death penalty and pro-restitution.

Polls open Nov. 3 at 7 a.m. and close at 8 p.m. For more voting information or to find your polling location, call the closest county elections officials: