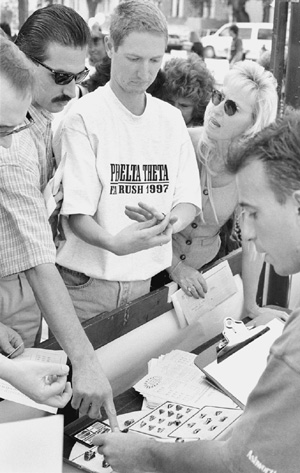 Senior Gilbert Gomez, with his parents Gilbert and Paula, was one of the many graduates purchasing class rings at the Jostens ring booth at the Graduation Fair on Saturday. Jostens one of several commencement service companies that attended the second annual event. / photo by Michael P. Bailey

As a result of last year’s success, the University of La Verne sponsored its second annual Graduation Fair on Saturday, Feb. 22, in Sneaky Park.

The fair allowed students, both undergraduate and graduate, the opportunity to receive further information in regards to the 1997 Commencement.

Representatives from various programs and services were available to provide the information essential in making Commencement a success.

Throughout the event, representatives of the information booth raffled a variety of merchandise and gift certificates contributed by each service.

As visitors walked along the sidewalk, each booth provided anything from complementary drinks and popcorn to order forms for the purchase of caps and gowns.

“This is my 10th year working as video recorder for the University of La Verne, and the Fair makes graduation preparations much more convenient for the student and myself,” said Bill Neill, president of Lordsburg Productions, which videotapes the ceremony.

When asked about the advantage of the Graduation Fair, Neill said, “The fair gives us the opportunity to receive pre-sale orders for graduation videos, giving the company [Lordsburg Productions] an idea of the quantity of videos we will produce.”

Prospective graduates had the chance to make graduation arrangements with representatives directly, rather than through the telephone or mail.

Several attendants commented that the presence of service representatives eased their fears and concerns.

Kimberly Light, a senior psychology major, said, “The fair has been helpful in getting all my stuff done before graduation. The Jostens announcements service was most helpful; I could make my arrangements now, instead of sending everything through the mail.”

Visiting the University of La Verne’s main campus also allowed students from other ULV campuses the opportunity to become familiar with the setting prior to the graduation date.

“There are several ULV students who do not attend the main campus,” said Josie Schneider, academic records analyst for the Registrar’s Office.

“When students from other La Verne campuses arrive for graduation, they feel awkward because they’ve never been to the La Verne campus. The Graduation Fair gives these students the opportunity to tour the campus and become familiar with it prior to the commencement exercises,” Schneider said.

For such reasons, Registrar Marilyn Davies demonstrated a visual seating chart for the Commencement ceremony. In this manner, students had an idea where they would be seated, and could inform family and friends of what side to sit on.

Overall, the second annual Graduation Fair seemed to have a positive outcome, with the number of participants and students demonstrating its success.

“It definitely went well when we introduced it to the University last year, and this year proved to be an even greater success,” said Steve Eubanks, assistant to the associate dean of student affairs and one of several coordinators of the Graduation Fair. “As long as we get the same response from students, the Graduation Fair will continue.”