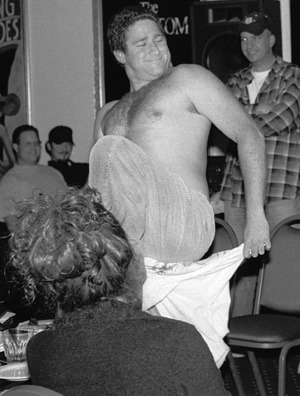 KULV sponsored a Party Bus promotion Tuesday night to Imagine That in Upland. Winners of the radio call-in contest and other La Verne students were invited to take the Party Bus to Imagine That, where there were free food and prize giveaways. The night ended with a hypnotist show, featuring Rick the Hypnotist, where several students were hypnotized and participated in outlandish acts. Later in the show, hypnotist duties were passed on to senior Matt Durant. Ryan Sones, senior, was convinced by Durant that he was a stripper. Sones performed as if he were a seasoned veteran. / photo by Matt Wright