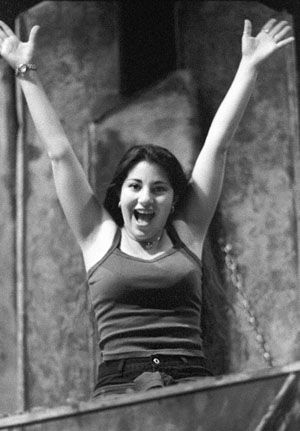 Eugenia (Nia) Athena Foes is the leading lady in Calderon de la Barca’s play, “Life Is A Dream.” Foes came to La Verne for the first time at the beginning of fall semester. She transferred from La Verne’s Athens, Greece, campus to come here for one year. “I came for the experience and to learn,” Foes said. She is pursuing a bachelor’s degree in management with a minor in theater. “Life is a Dream” starts tonight, Nov. 6, 11, 12-13 at 7:30 p.m. / photo by Matt Wright

Every day is full of endless possibilities and life changing experiences for people like Nia Foes, who came to the University of La Verne from Greece, to be an active part of the community through her acting career.

“Love like you’ve never been hurt, dance like no one is watching and dream like all your dreams may come true,” advises Foes, a junior management major and theater minor, who has only been at ULV for two months.

Foes, who plays a lead role as Rosaura in “Life is a Dream,” which opens tonight, was born in Saudi Arabia. She lived there for nine and a half years before coming to the United States. Her father was born in Greece, and her mother was born in Ecuador.

Foes has an older sister who is 28, and a younger brother who died at 19 of an overdose.

“My brother showed me that there is another part of the world that not everyone sees,” said Foes. “There are a lot of lost dreams, pain and unhappiness that people experience.”

While this experience was a tragedy in her life, Foes recalls the things her brother taught her. The experience of losing her brother was the second of two tragedies that have had a major impact on her life.

Three years ago, Foes and her father were driving in a car, when a freak accident took her father’s life, and left her paralyzed with doctors fearing she would never walk again.

“I was told that my condition was too serious to leave the hospital and attend my father’s funeral,” explained Foes. “But I told them that if they didn’t let me go, then I was going to jump out the window and crawl to the funeral.”

She was released under the condition she be taken in a wheelchair. The paramedics forgot the wheelchair, but Foes was determined to attend the funeral. With the help of paramedics, she walked to the grave site, hours after doctors said she would never walk again.

“I believe very much in the power of will and the power of the mind. My will to be at my dad’s funeral was stronger than a doctor telling me that I would never walk again,” said Foes. “I want people to know that if they really believe in something, they can do it. People have a lot more power than they think.”

The experience of losing her father and brother changed her perspective on life. Whenever she gets depressed, Foes remembers that there is always someone who is in a worse situation.

Foes’ parents have been a major influence in her life. She said they taught her valuable lessons that have helped her become the person she is today.

“My parents have taught me how to be open-minded and how to think for myself,” said Foes. “They have taught me to not accept everything around me just because the world is the way it is, and to make a difference in the way I live my life.”

When Foes feels she needs a break from her everyday life, she travels to her favorite vacation spot – Evia, a small island in Greece where Foes’ father took her every year.

“This island is a small village, where people are very simple and hospitable,” said Foes. “It is a beautiful place to visit, with a sense of peacefulness that allows me to sit and write, and think about myself and who I am.”

Her most vivid memory from childhood was when she was 14 and visiting the island with her parents. Foes described a moment when she was saddened because her heart was broken.

“I was feeling depressed, watching the sunset, and all of a sudden it began to rain,” explained Foes. “I felt compelled to get up and go swimming in the sea. It was a peaceful moment for me that made me forget about all of my problems.”

Foes explained that “the simplest moments in life can make unhappy thoughts disappear and become insignificant in your life.”

Issues such as drug abuse and life-threatening diseases are important to her. She has participated in many productions dealing with these issues.

“Wit,” a play that portrays the life of a woman dying of cancer, starred Jane Dibbell, associate professor of theatre arts, in the leading role. Dibbell, battling cancer herself, left many moved by the authenticity of the show. Foes was in the cast.

“This play was one of the most important plays I’ve ever done,” said Foes. “It was a play about spiritual morality and courage. It helped people understand what life is like every day for someone battling with this disease.”

Foes directed and portrayed a nurse in the play. She was involved in all aspects of the production, which extended far beyond the stage into her real life, as she aided Dibbell during the production.

“Nia was brave in taking on directing the play. She played a double role, by taking care of Jane at night in real life, and by acting as her nurse in the play,” said Dustin Lorentz, a senior, who was also cast in “Wit.”

“She had a dual existence in this play that went hand-in-hand,” he said.

Foes has been acting since she was young and singing for the past six years. She has directed and written various plays and is currently writing a book.

Her book will deal with problems people deal with in society. Some of the issues will include drug abuse and rehabilitation, life-threatening diseases and how to deal with them through information and understanding, instead of fear.

While Foes is passionate about acting and directing, she wants to get her master’s degree in public relations. She has done public relations work and has been a member of the student council at her school in Greece.

Obren Milanovic, sophomore theatre major, respects Foes in many ways. He said, “First of all, I’m impressed by anyone who can speak three languages. Combine that with intelligence, kindness, beauty and talent, and you have one hell of a young woman.”