By Matt Wright, Vicky Martinez on September 17, 1999 in News 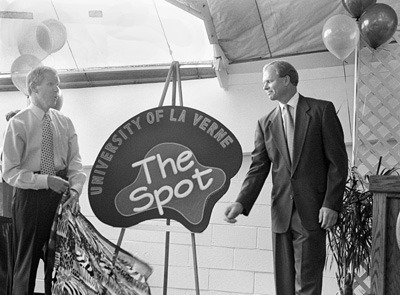 Grand reopening festivities for the University of La Verne’s “new” snack bar took place Monday, with a food fair and musical entertainment from Obscure Cover featured as part of the celebration.

The formal ceremony began with a short speech from the dean of student affairs, Dr. Loretta Rahmani, who was the master of ceremonies.

In her speech, Dr. Rahmani expressed enthusiastically that The Spot’s reopening had been well worth the wait.

“I’m so old, that I remember when both The Spot and the bookstore were in that space at the Miller basement,” Dr. Morgan said. “The University of La Verne has come a long way, and The Spot is just a magnificent addition to the campus which is going to serve our students and staff extremely well.”

Senior Khristine Gustilo was among a number of students present at this week’s event. “It is great to have the Spot finally open,” she said.

During the program, Dr. Morgan and Wright led the unveiling of The Spot’s new logo, which was designed by Lisa Zalueta, marketing director for Aramark. The logo hangs above the entrance to The Spot.

“The logo does not have another purpose than to bring an image to The Spot,” Zalueta said, adding that she created the new logo based on the University’s mascot-the Leopard-because it was already part of The Spot image.

“The name and the prototype of The Spot logo were already determined,” she said. “So I basically got to work on the colors and on the way to present it.”

The exact renovation costs have not been revealed, but Wright said it went beyond the allotted budget.

To make the celebration possible, a special committee was formed. The members of this committee were Dr. Rahmani; Rudy Montaño-Cordova, associate dean of student affairs; Laura Rich, administrative secretary to the dean of student affairs; Lura Poggi, director of education and leadership and transition programs; Laura Venturini, assistant director of career placement as well as Brett Roth, director of dining services; Michael Houdyshell, coordinator of campus activities and commuter programs; Cindy Denne; director of the Health Center and Zalueta.

Rich, who was in charge of the festivities, said that the main purpose of the celebration was to give ULV students the opportunity to enjoy themselves and enjoy their new Spot.

The formal ceremony concluded with the words of appreciation of Dr. Rahmani for all who contributed to the renovation of The Spot.