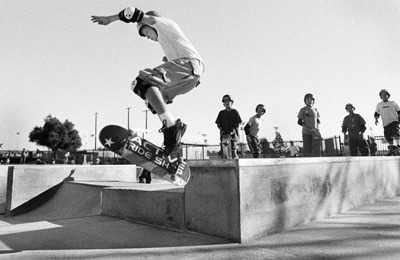 The new La Verne skate park is almost entirely concrete and consists of bowls, handrails, fun boxes and a pyramid jump. Jeff Johnson, 14, of Wrightwood attempts a kick flip off one of the fun boxes featured at the park. / photo by Matt Wright

by Greg MacDonald
Editor in Chief

The city of La Verne now offers a place where adults and children alike can go to skateboard and rollerblade.

The activities, which are banned within La Verne’s city limits, can now take place in the city’s own skate park, which opened late January. The facility, open from 2:30 p.m. to dusk Monday through Friday and from 7 a.m. to dusk Saturday and Sunday, is located near the Bonita High School campus.

For those who wish to avoid receiving a ticket for doing the activity they may most love, the park offers that hideaway.

“Everywhere you turn around, you see skateboarders, whether it’s going from school to home or home to the market or just hanging out,” Bill Aguirre, director of parks and services in La Verne, said. “They just need a facility of their own to call home.”

“I’m sure [the numbers of violations in the city] was a concern when the city built it,” La Verne Police Lt. Randy Latham said. “It goes back to some people who obey the laws and some who don’t.”

Plans for the site were approved in September by the La Verne City Council.

“I’ve been skating in La Verne my whole life,” Eddie Hume, 18, senior at Bonita High School said. “We never had anything like that before. We never had, like, a scene. Now it’s blown up.”

Although the park is a place that gives skateboarders and roller bladers the opportunity to master tricks, there are rules for the location. Among them include: wearing protective gear, like helmets and elbow and knee pads, and the maximum capacity of the area.

“Those rules are there for a reason,” Lt. Latham said. “So far, the parental support for the rules has been very, very strong. They have been very supportive.”