By Matt Wright, Melinda Sanchez on February 25, 2000 in Sports, Tennis 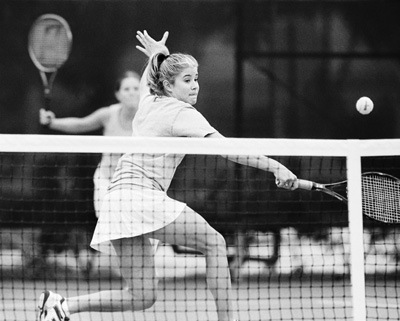 La Verne women’s tennis team members freshman Christan Krusic (foreground) and sophomore Emily Hofer teamed up Tuesday afternoon to take on Biola’s No. 2 doubles team. Biola’s team came up victorious in the match, as they did most of the day. Biola won the day’s event with a score of 7-2. The women’s tennis team plays today at Redlands at 2 p.m. / photo by Matt Wright

The rain let up and cleared a path for the women’s tennis team to play against Cal Lutheran on Saturday. But Cal Lu poured down hard on La Verne and claimed its victory by winning every singles and doubles match, resulting in a 9-0 final score.

Under the instruction of ULV’s new head coach Steven Bergovoy, the women’s tennis team came out confident and strong.

“Looking at this team, I see them a lot better than the past few years,” said Emanuel Howard, the United States Tennis Association official who refereed Saturday’s match.

The teams split and began the competition by playing three matches of doubles. No. 1 ULV singles player Lynette Lucas and No. 3 singles player Sara Gifford teamed up to take on Kaarin Benson and Jen Stoltenberg of Cal Lu. The eight-game set concluded with Cal Lu on top 8-2, dampening ULV’s spirit.

Lucas, referred to as “the backbone of the team” by Bergovoy, displayed perseverance and upheld her reputation for keeping “the tension down and spirits high.”

Although drained from their defeat in the doubles matches, the ULV women came out and gave their all for the six singles matches.

Bergovoy said that they keep their strength because “they have the fighting spirit.”

That warrior ethic shined through when Gifford, playing the last singles match of the day, was cheered on by her teammates in the stands.

According to freshman team captain Christan Krusic, Gifford finds her opponent’s weakness and fights until she wins.

But this time Cal Lu came full force and flooded the team with long volleys and tough serves that even Gifford eventually drowned in.

Bergovoy said that he wants to see the team “have fun and enjoy themselves,” but he also hopes to “take the team as far as they can go, and put ULV on the map.”

Going into their fifth match of the season and second of league, the team has come together, reflecting Bergovoy’s main goal, “to get people to pull out their potential and gel as a team.”

ULV has a chance to chase away the clouds when they visit Redlands today at 2 p.m.