By Erin Brockman, Natalie Veissalov on December 5, 2008 in News 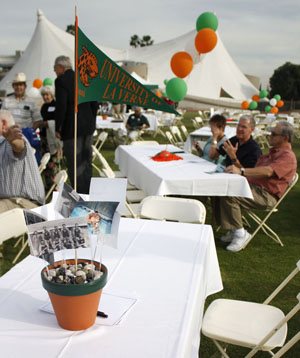 “Oh, crum!” These two words were used to remember Roland Ortmayer on Nov. 22. Not only were they emblazoned on the backs of bright orange t-shirts, but they were also heard in many of the speeches that day. Little touches of Ortmayer could be found everywhere, from the ice-cream, whipped cream and brownies that he had asked be served to the guests, to the pennant table toppers displaying pictures of Ortmayer throughout his life. / photo by Erin Brockman

Family and friends gathered at Ortmayer Stadium and later in the Sports Science and Athletic Pavillion to share memories about Roland Ortmayer’s life on Nov. 22.

Ortmayer, who died Oct. 9, was a legendary figure at the University of La Verne.

There were about 250 people in attendance to honor his life.

Many spoke at the event, including his daughter, Corlan Harrison.

Susan Boyer, senior minister at the La Verne Church of the Brethren, was the first to speak. She ended her speech with a prayer.

“We are here to ponder what his legacy means for all of us,” Boyer said. “You are all welcomed in this time and space.”

ULV President Stephen Morgan also shared some words with the audience. “Today, we celebrate Ort,” Morgan said. “He spent more time at La Verne than at his own home.”

Peter Baum, Ortmayer’s friend and a graduate of ULV, shared the many sides of Ort­mayer he encountered. Accor­ding to Baum, there was a “football Ort, a philosophical Ort, a baseball Ort, a caring parent Ort, movie critic Ort and a saintly Ort.” Baum ended his speech with, “We will miss your physical presence, but your spirit will always be with us.”

Warren Carter, who played basketball for Ortmayer, said that although Ortmayer was his coach, he was really a parent to him. “Reputation takes a lifetime to earn; however, in just 10 years of being at La Verne, he gained that reputation,” Carter said.

Rex Huigens, professor of movement and sports science and assistant athletic director, also shared the experiences he had with Ort. “I didn’t go to La Verne College, I went to Ort college,” Huigens said. “Ort always put everyone in front of himself,” Huigens said. “He taught me about compassion.”

Huigens shared a story of when a player forgot his shoes for the game. Ort asked him what size he was. The player told him size 10, and he gave him his shoes. Ort was left on the sidelines wearing only his socks.

Kay Leum, graduate from ULV and a friend of the family, spoke at the memorial service.

“Ort gave us so many opportunities to do things for the first time,” Leum said. “My life is so much richer because of him.”

The last to speak in the Ortmayer Stadium was John Kusleika, a 1990 ULV graduate and high school football coach.

“Words cannot be expressed as to how much of an honor it is to speak about a great man,” Kusleika said. He reminisced on the words Ortmayer once told the team, “We all have a brain, let’s use it.”

“I will miss him, especially in the summer when I am in Montana with my family, floating a river, and gearing up for football season,” Kusleika said.

The guests were invited into the Sport Science and Athletic Pavilion to share even more memories of Ortmayer.

Steve Ort­mayer, nephew, said although Ort was his uncle, he saw him as a father figure. “He was an adventurous guy always looking for something to test the limits.”

Throughout the memorial service, it was mentioned many times how Ortmayer invited everyone in.

“He never had a meal without an outsider involved,” Steve Ortmayer said.

“My parents were so big on sharing,” Ortmayer’s daughter, Corlan Harrison, said. “There were only four of us in the family, but we owned life jackets for all of you guys to come with us.”

“People saw themselves reflected in him,” Steve Ortmayer said.

There was also a PowerPoint tribute to Ortmayer and a benediction by Boyer.

As Corlan gave her speech of her dad, she explained how it was impossible to argue with her dad.

“After 53 years of marriage, my parents never argued, not once,” Harrison said. She ended her speech with this, “My dad was a priceless gem.”

“Gems shine brighter when surrounded by diamonds,” was a metaphor Harrison used to explain how all the people who surrounded Ortmayer in his life made him shine bright.