By Jonathan Smith, Walter Mansilla on December 5, 2008 in Sports, Volleyball 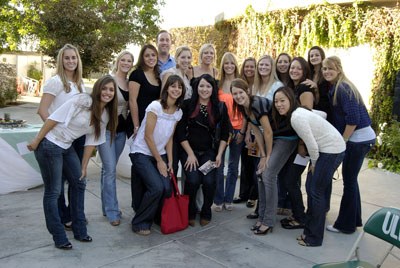 It was the end of the road for the women’s volleyball team in the NCAA Division III National Championship finals as the Emory Eagles defeated La Verne, 3-1, in Bloomington, Ill.

The loss came after an emotional win the day before against the then No. 1 ranked Juniata, also know as the Eagles, 3-2.

“That night, we were the better team,” senior outside hitter Brianna Gonzales said about the Juniata match. “We had to keep fighting, it wasn’t over.”

“Juniata was a huge hurdle for the team to defeat the No. 1 team in the nation,” head coach Don Flora said. “We dug a little bit deeper, and we were the better team that night.”

La Verne ends the season 27-3, boasting its best record since the 2001 championship season.

Against Emory in the championship match, La Verne played splendidly and almost error-free in the first game.

The Leopards led early after a solid kill by Gonzales to make it 4-1.

Emory came soaring back after a kill by the Eagles’ Amelia McCall to make it 4-3.

The Eagles tied the game after a blocking error by Crista Jones to make it 4-4.

However, that was the closest the Eagles came to La Verne in the game after the Leopards were able to go on a seven straight scoring run to improve the score to 15-8 after a kill by sophomore outside hitter Anna Calmer.

“Everything really went our way in the first game,” Yesenia Lopez said. “I never lost confidence in the team; everyone still believed.”

The Leopards increased their lead to 20-10 after a kill by Gonzales. La Verne eventually won the game, 25-16, following a kill by Calmer.

But it was to be the lone win for La Verne for the night.

Communication problems and miscues were the downfall for the Leopards after two La Verne players missed a dig to give the Eagles a lead of 6-5.

The Leopards led again in the match, but were not able to overcome their errors as the Eagles won the game, 25-21, after a kill by McCall.

In game three, the Leopards were again back up against the wall after an attack error by Gonzales extended Emory’s lead to 9-3.

The Leopards came roaring back after capitalizing on the Eagles’ errors.

La Verne came within two after an attack error by Emory’s Dani Huffman.

But the Eagles, led by Huffman, extended their lead to 19-13, following a kill by Huffman.

Eventually, the Leopards lost the set, 25-17, following a blocking error by Lopez.

In the final game, it seemed the Leopards would pull another come-from-behind win in the fourth after a kill by Jones to make it 4-1.

Following another attack error by Emory, the Leopards forced Emory to take a timeout.

The Leopards then widened their lead to 8-6, following a dumped kill by Gonzales, set up by Lopez.

But Emory etched out to tie with the Leopards, 13-13, after a kill by Maggie Baird.

La Verne led again after a service ace by Villanueva to make it 22-21, but a couple errors gave the edge to Emory; then a kill by Baird gave the Eagles the win with a score of 25-22.

Gonzales led La Verne with 18 kills in her final game as a Leopard.

For Emory, Huffman proved to be the difference maker for the Eagles as she tallied 13 kills.

“Their middles were a lot more consistent this time than in the tournament here,” Lopez said.

“She played the game of her life,” Gonzales said. “She was good.”

Both teams were familiar foes, as Emory and Juniata participated in the La Verne Invitational in October.

And both teams gave the Leopards their only losses in the regular season.

Against Juniata in the semi-final match, the Leopards started off slowly against the Eagles. La Verne trailed in the early part of the set but was able to tie the game, 13-13, after a big kill by Gonzales.

The Eagles then went on a two-point run after a kill by Juniata’s Erin Albert to make the score 15-13.

The Leopards came within two points after a decisive kill by junior middle blocker Ashley Morgado.

But Juniata was able to broaden its lead too far for the Leopards to catch, as the Eagles won the set 25-20 after a kill by Amber Thomas.

In the second set, the Leopards came out on fire and on all cylinders as they led 3-1 after a kill by Gonzales.

Juniata was able to come within one as the team rallied behind a kill by Thomas.

La Verne then went on an eight point run against the Eagles after a kill by Anna Calmer.

The Eagles’ efforts of a comeback ended as La Verne rallied behind sophomore outside hitter Rebecca Villanueva’s dumped kill to make the score 21-15.

It was a different tune for the Leopards in game three.

La Verne saw its lead shrink after a kill by Albert.

Errors proved too costly for the Leopards as Juniata capitalized on mistakes to bury La Verne.

The Leopards tried to rally back after Jones’ right side attack broke the Eagles defense, to come within five of Juniata.

Plagued by mistakes, La Verne’s effort of coming back ended after a block by the Juniata players to end the game, 25-13

After the Eagles’ game win, the Leopards found themselves back against the wall, losing 2-1. La Verne saw a similar start against Juniata in the fourth game, and soon found itself down 5-2 after sophomore Chelsea Sleight’s hit went in to the stands.

La Verne rallied back to tie the set 7-7 after a massive block by Villanueva.

Points were exchanged back and forth, but mistakes proved again costly as the Eagles flew to an 18-14 lead.

Behind Jones, La Verne rallied back after a big block by Jones to make it 19-18.

The Leopards extended their late lead to 24-20 after a strong kill by Jones.The Leopards won the set 25-22.

In the tiebreaker game, The Leopards led 9-6 after a dumped kill by Lopez. The Eagles would not go out without a fight and led with match point after a service error by the Leopards.

But Gonzales registered a massive kill to deny the Eagles a chance to advance and tied the score at 14-14.

Gonzales answered the call again after a kill from the back row put La Verne up, 16-15.

Down match point, Juniata’s effort at tying the game failed after Paige Johnston hit the ball out of bounds to advance the Leopards to the finals.

“Serving is the point where you can control the game,” Gonzales said.

The win against Juniata came from La Verne limiting its mistakes in the final minutes of play.

“We knew we had nothing to lose,” Jones said. “Juniata has always been a team we have been after for the past couple of years, so we just went out and grabbed it.”

Flora said that the team service started off sluggish but improved during the match.

Also, he said that his middle blockers got more touches late in the match.

“Our confidence just grew,” Flora said after the game. “I think it’s an internal thing to trust our training; to trust why we believe we are the better team.”

Gonzales finished the match with a double-double of 16 kills and 22 digs. Villanueva added 10 kills for La Verne.

“They’re the team we wanted to play in the semifinals, and it was a great match,” Gonzales said.

Gonzales said that the team was not down, even when they were losing.

“We were not going to lose the match,” Gonzales said.

Although the Leopards did not finish as champions, they could be proud of themselves.

“We competed; we stayed very poised,” Flora said. “I’m proud of our competiveness.”

Leopard Scoreboard
Do a good deed, help a child in need