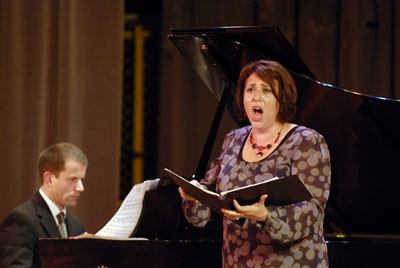 The University of La Verne was treated with a Brazilian performance featuring guest musicians and faculty in a concert titled, “Brazilian Impres­sions,” performed Oct. 10.

Guest pianist Angelis Chevalier started off the show with songs that, she said, had “a mix of European influences with an impressionistic sound.”

Villa-Lobos is one of the most famous Brazilian classical composers and has written more than 100 songs in his lifetime. In the 1920s, he traveled to France to learn the European style of music and captured a new rhythm to add to his compositions.

The last couple of songs played by Chevalier on the piano truly had a Brazilian sound. Chevalier said the Brazilian people are usually very happy and Villa-Lobos composed the songs so that you can hear the happiness in them through the rhythm.

“I really enjoyed Angelis, perhaps because she really knew Brazilian music” Al Clark, associate vice president and academic affairs and professor of humanities, said. “It is in her soul.”

The second part of the performance, following intermission, were also pieces by Heitor Villa-Lobos that were performed by guitarist David Cahueque and Melissa McIntosh Landis, an adjunct music faculty member, singing soprano.

The two performed the Bachianas Brasileiras No. 5, one of the most well known compositions, which was originally written for eight cellos and voice.

Cahueque joked that only they would attempt to fit the entire composition into solo guitar and voice.

McIntosh Landis sang the majority of the pieces in Portuguese; she thanked Chevalier at the end of the show for teaching her the correct Portuguese pronunciation.

After their performance, Cahueque came back on stage to perform more compositions by Villa-Lobos on solo guitar.

“David is a beautiful guitarist, and his performance was great,” Jeffrey Cohen, La Verne resident said.

The third part of the concert had a set of five songs composed by Villa-Lobos and was sung by McIntosh Landis along with Timothy Durkovic on piano.

This set of songs was about sorrow and romance and were sung in Portuguese.

“I thought it was a very exciting program,” Clark said. “It was an extremely well played concert.”

At the end of the show, all of the performers came back up on stage; however, Chevalier never made it back up as McIntosh Landis gave a big thank you to the ULV music department and the audience.

“This was a wonderful and entertaining show,” Margarita Flores, Upland resident, said. “It was quite a treat to be able to see this performance and this was something that was very different from what I’m used to.”