By Richard Lugo, Walter Mansilla on October 10, 2008 in Football, Sports 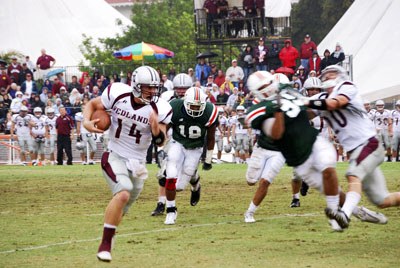 Redlands’ quarterback Steve Smith (14) rushes for a yardage gain during the first half at Ortmayer Stadium on Saturday, Oct. 4. Smith, who was sacked twice in the game, passed for 156 yards and a touchdown in leading the Bulldogs to a 37-7 victory. La Verne’s defense produced their only score of the game on an interception that was returned 60 yards for a touchdown in the second quarter. / photo by Walter Mansilla

Last Saturday’s football game against Redlands was a 37-7 blowout in the box score but a thriller in person.

There was rain, clouds, more than a thousand fans and lots of scoring.

Unfortunately for the Leopards, the only scoring they did was on defense and it came in the form of an interception returned for a touchdown.

La Verne never seemed out of the game; however, the Bulldogs running attack got stronger every quarter, as they cruised to a 30 point victory.

Redlands, which entered the game as the No. 17 ranked team in Division III, earned its third straight victory on the season.

La Verne’s record now stands at 0-3 overall, and 0-1 in the Southern California Inter­collegiate Athletic Conference. Two of the Leopards’ three losses this season have come against top 25 teams.

“No loss is a bad loss,” senior running back David Merlos said. “Our first three games were all against top teams. I don’t think there’s any team in the area that’s played a tougher schedule.”

Although Redlands controlled most of the first quarter, holding possession for more than 11 minutes, the Leopards held the momentum early on when they blocked a 46-yard field goal attempt.

The team and the fans went wild, and for a second it seemed as if this would be the game when the Leopards would establish themselves as the team that the players and coaches have been talking about all season.

It seemed as if, under the cold mist that hovered over Ortmayer Stadium, the Leopards could win against a nationally ranked team.

It took more than Redlands’ early 11-0 lead, courtesy of a touchdown pass from Bulldog quarterback Steve Smith and a field goal from Joe MacMillian, to deflate the crowd, but they eventually did.

The offensive game plan for Redlands seemed apparent after a few drives against ULV’s defense.

The Bulldogs were intent on running the football and controlling the clock, both of which they did very well.

La Verne’s defensemen, who have seen more time on the field than the offense so far this season, played Redlands tough all four quarters.

“Defensively we played tough and did what we needed to do,” senior linebacker Jason Carpenter said. “We hit them harder than any team will all season.”

The Leopards received another spark that ignited the crowd at the end of the second half, with a 60-yard interception returned for a touchdown from freshman defensive back Rocky Keawekane.

Keawekane’s score cut the deficit to 18-7 heading into halftime.

In the second half, it was more of the same for the Leopards.

The Redlands running attack controlled the flow of the game and slowed it down. Time of possession was also a big factor, as Redlands held the ball for 34 minutes compared to La Verne’s almost 26 minutes.

The Bulldogs were led on the ground by running backs Zack Schafer and Jeff Stewart. Schafer carried the ball 16 times for 176 yards and two touchdowns. Stewart added 22 rushes for 131 yards.

Redlands put up 19 unanswered points in the second half as they handed La Verne its third straight loss and first in conference play.

La Verne struggled running the ball for the second straight game, as the Bulldogs held the Leopards to only 31 yards on the ground.

“I feel we played hard and physical and took the fight to them, which is something we wanted to do,” Merlos said. “We have a really good offensive line; something is just kind of missing…once it clicks, our running game is going to be good.”

“Redlands was the best team we’re going to play all year,” Le said. “All of our receivers were getting open. Andre just found me.”

Junior quarterback Anthony Andre passed for 118 yards and had three interceptions in the loss for the Leopards.

Andre, who was under pressure from the Bulldogs’ defense throughout the game, was sacked five times.

The Leopards look to rebound tomorrow night when they play Claremont-Mudd-Scripps in Claremont at 7 p.m.

“We’re staying very positive,” Carpenter said. “We’ve had physical practices all week…we’ll be ready to smash them in the mouth on Saturday.

La Verne beat CMS, 31-7, last year to earn their first and only win on the season.

“We need to keep getting better,” Easterly said. “We’re going to be ready to rock and roll on Saturday.”

Movie Review: This ‘Playlist’ is stuck on repeat
Hoffman leads team as graduate