By Jonathan Smith, Walter Mansilla on November 7, 2008 in Sports, Volleyball 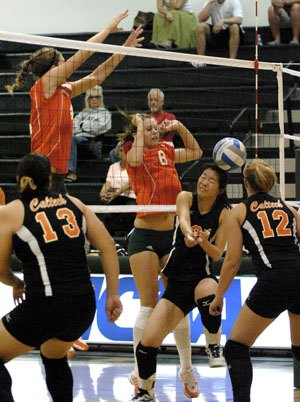 Caltech Beaver Vivian Yang (No. 2) shrinks from the ball delivered by Leopard Samantha McCosh (No. 8) during the third game at Frantz Athletic Court on Saturday. The match was short, lasting just a little more than an hour, with the Leopards sweeping Caltech, 3-0. / photo by Walter Mansilla

The women’s volleyball team needed no tricks on Nov. 1 as it crushed Caltech, 3-0, in front of a small crowd at Frantz Athletic Court.

But the team received a couple of treats on Tuesday, as La Verne romped on Whittier.

“We raised our level of joy and raised our energy and put them away in games two and three,” head coach Don Flora said.

The Leopards are happy that their season will continue in the tournament at La Verne.

“We’ll have our crowd here, our energy and our confidence,” junior setter Yesenia Lopez said.

Flora is also happy that the school is hosting its fourth tournament in a decade.

Flora said that he is glad the team can play for the people who been there the most.

“We love having our fans and students out,” Flora said. “It’s a blast. I hope a lot of people come out.”

La Verne moved to 22-2 overall on the season.

The Leopards had another stellar performance, hitting at a .547 percentage. La Verne’s defense also was on point, keeping the Poets to a .043 percentage of the night.

While the Leopards looked on point, there is always room for improvement.

“We looking forward to see if we can fine tune and play at an elite level,” Flora said.

La Verne played all its team members in the match, giving some of its top players, like senior outside hitter Brianna Gonzales, some breaks.

“Everyone got a chance to play,” Lopez said. “It was cool that they did.”

Concentration and focus were the keys for La Verne as the team executed the match almost flawlessly.

“I thought we played a really clean game,” Lopez said. “We made not a lot of mistakes.”

In the first two games, Caltech gave little compe­tition and the Leo­pards were able to cruise by.

La Verne, with its reserves in the game, saw game three start differently.

Caltech was able to pull ahead 2-0 after an ace by Vivian Yang.

But that was the only lead the Beavers were able to manage, as the Leopards were able to come back and lead 8-4 after a massive kill by sophomore outside hitter Rebecca Villanueva.

Caltech tried to come back after La Verne mismanaged a hit to make the score, 15-10.

However, the Leopards extended their lead to 23-13 after a kill by junior middle blocker Crista Jones.

Caltech tried to come back, getting to 23-16 after a kill by Caltech’s outside hitter Katie Peters.

But the Leopards squeaked the victory out after a kill by Villanueva.

The Leopards will find out their tournament placement on Nov. 10 when the NCAA regional tournament schedule will be announced.

But the team wants to finish conference play on a high note.

“We want to win SCIAC the way we want to, which is undefeated,” Lopez said.

The Leopards will find out who they play on Monday, Nov. 10 when the pairings and teams will be released.