By Debbie Allison, Nicholas Mitzenmacher on April 2, 2010 in LV Life 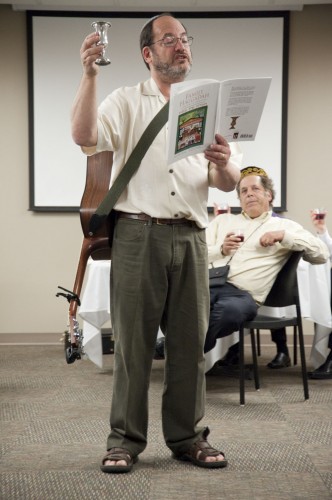 Cantor Paul Buch from Temple Beth Israel in Pomona led the Model Seder in The President’s Dining Room on March 25. The seder is a Jewish ceremonial dinner held on the first night of Passover. More than just a meal, the dinner includes readings from the Haggadah, a Jewish religious text, prayer, singing, discussion, story telling and ritual appetizers before the dinner. The President’s Dining Room was filled to capacity with students, faculty, staff, and guests./ photo by Nicholas Mitzenmacher

Music filled the air as more than 30 students, faculty and community members celebrated the Jewish Exodus from Egypt in a Model Seder on March 25.

The event, which was held at 5:30 p.m. in the President’s Dining Room, combined song, stories, and food, as everyone in attendance learned about the Jewish culture.

“The seder is a liberation experience for all of us,” Cantor Paul Buch of Temple Beth Israel said.

Buch led the seder for the second year and stressed that through this event all people could celebrate and feel the same liberation the Israelites felt after their escape from slavery.

Buch said that each person in the room may have been struggling with some personal bondage or stress and that this ceremony was a way to let go of that and to feel free from those unwanted feelings.

The way in which Buch explained the story was unique in that it was told primarily through song.

These songs served as a way to involve everyone in the telling of the Jewish Exodus, while also making the Seder more easily understood by children.

One such song was sung to the tune of “Take Me Out to the Ball Game” and included lyrics like “Take us out of Egypt, Free us from slavery, Bake us some Matzah in a haste, Don’t worry ‘bout flavor, Give no thought to taste.”

Those in attendance were also given a book upon arrival to help them follow along.

The book, called “Family Haggadah: A Seder For All Generations” addressed each step of the Seder, accompanied by pictures and song lyrics.

In order to tell the story, audience members from each table took turns reading portions of the book.

The term Seder means order, and there is a specific order in which it should be carried out with 15 steps in all.

It begins with the blessing, kadesh, followed by the hand washing, urchatz, the greens, karpas, and the breaking of the middle matzah, yachatz.

The ceremony is ended with the hallel, or praising God, the nirtzah, or conclusion.

These foods included zeroa, a roasted shank bone, beitzah, a boiled egg, marror, a bitter herb, in this case horse radish, charoset, a mixture of wine, nuts and pulp, karpas, a green vegetable, in this case parsley, and chazeret, a bitter herb used in a sandwich along with matzah.

Each food had a specific purpose and represented a certain part of the story.

The parsley, which had to be dipped in salt water, represented two different things; the freshness of Spring, the time in which the Passover story takes place, along with the bitterness of tears, in remembrance of the tears of their Jewish ancestors who suffered as slaves.

The Model Seder also emphasized the 10 plagues that befell the Pharaoh and his people when he did not listen to Moses and incurred the wrath of God.

During the Model Seder, as each plague was read aloud, participants dipped their finger in their juice and flung the juice onto the table.

According to “Family Haggadah,” this was done in order to acknowledge that all people are God’s creatures and that our joy is lessened when any one of his creatures suffer.

The Model Seder offered a way for all people, with any level of knowledge on the Jewish culture, to be involved in a celebration of a significant event in Jewish history that ultimately lead to liberation.

“I thought it was interesting,” Laura Acevedo, a freshman broadcast journalism major, said.

“I didn’t know they did a ceremony like this,” Acevedo said.

The experience was also enlightening for Kai Groschupf, a freshman broadcast journalism major from Germany.

“It was quite interesting, especially for me as a German to learn more about Jewish culture,” Groschupf said.

“It’s an event I would recommend to others to learn about Jewish tradition,” Groschupf said.

Debbie Allison can be reached at deborah.allison@laverne.edu.