By Erin Foltz, Nicholas Mitzenmacher on March 5, 2010 in News 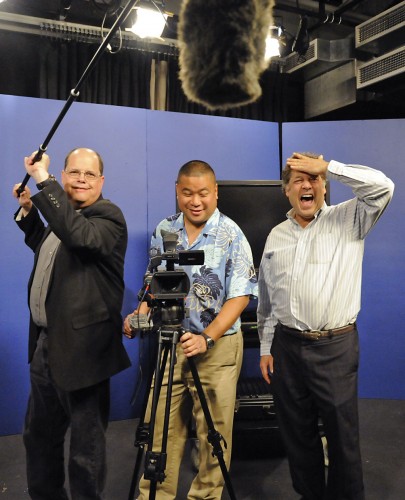 The Pride of La Verne, a film that previously won the Accolade Award, was shot by Mike Laponis, Shane Rodrigues and Don Pollock (left to right). The three were chosen as the winners of the Award of Excellence from the Broadcast Education Association for their film. The film contained interviews and history on the city of La Verne./ photo by Nicholas Mitzenmacher

A video made by University of La Verne Commun­ications Department professors Mike Laponis, Don Pollock and Radio/TV Operations Manager Shane Rodrigues has won a prestigious Award of Excellence from the Broadcast Education Association.

The three teamed up to create the 11-minute video titled “The Pride of La Verne” to present to the attendees at the 2009 President’s Dinner Gala. The film paid homage to the honoree of last year’s event, the city of La Verne itself.

It highlights why La Verne is a great place to live, explains the history of La Verne and illustrates the relationship between the city and the University. In addition, interviews with prominent members of the city, such as city council members, the mayor and some faculty members from ULV, portrayed their view on what makes La Verne special.

“Having the video be about a city, rather than a person presented special challenges,” Laponis said.

Challenges included going through stacks of old video footage and photos of the city to find images that show the historical importance of La Verne.

They also did a lot of research on the city and university, finding pictures, artifacts and museum displays that were pertinent to telling the story, as well as shooting current footage of La Verne.

The final leg of production was editing all of the video and photos.

“We did hours and hours of editing,” Rodrigues said. “Making an 11-minute video from over 30 hours of video took a lot of time.”

As well as all the work being done by the professors, there was help from student volunteers and students participating in the work study program.

“The Department is very hands-on with learning, and there were several students who helped with aspects such as shooting during production, logging and transcribing and also with editing post production,” Pollock said.

Laponis, Pollock and Rodrigues are pleased and honored that their work is being recognized by the Broadcast Education Association.

“This is a great faculty-juried competition,” Pollock said. “It is gratifying to know you are getting this award from other professors of broadcasting from around the world.”

Sent in for evaluation in October, they found out that they had won the award this February.

“It is always an honor to have your work recognized by colleagues who are fellow video makers, and educators,” Laponis said. “I plan on showcasing it on the wall in my office.”