By Carly Hill, Nicholas Mitzenmacher on February 26, 2010 in News 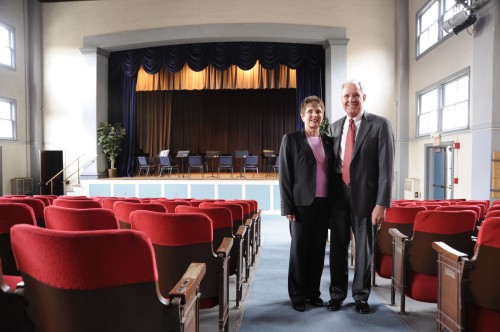 Founders Hall, the third oldest building on the La Verne campus, was completed in fall 1926. The first student body assembly took place in Founders Auditorium on November 1, 1926. Fund raising has begun to renovate the aged auditorium, which has long been home to musical performances and theatrical events. Once the building is finished, the auditorium will be renamed Ann and Steve Morgan Auditorium in dedication to President Steve Morgan and his wife Ann Morgan/ photo by Nicholas Mitzenmacher

On Jan. 4, the University of La Verne Board of Trustees voted unanimously to rename Founders Auditorium to the Ann and Steve Morgan Auditorium.

“It was a complete surprise,” said Morgan, president of the University of La Verne. “It just seems like the nicest thing they could think of doing for us.”

Morgan is the 17th president in La Verne’s history, and has served for more than 25 years. Last week he announced his plans to retire in 2011. He and his wife are also alumni of the university.

“I think it will be extremely special to be able to use the Morgan Auditorium,” said Kathy Lamkin, professor of music. “It is an honor for the university, especially because Steve Morgan has contributed so much to the University of La Verne.”

In addition to the new name, the auditorium will also be given a makeover, complete with new seats, window coverings, and acoustics.

Included in the remodel will be rebuilding and extending the stage, putting in air conditioning and heating, and new lighting, which will cost between $3 million and $4 million.

“The remodel will mean a very nice place to use for musicals and lectures. We are very supportive of the talents of our students,” Morgan said.

Construction on the auditorium will start sometime in the spring, and conclude in spring 2011, just before Morgan is set to retire.

“Ann and Steve Morgan have contributed so much to the university,” Al Clark, associate vice president of academic affairs said. “I think this honor is long overdue.”