By Scott Mirimanian, Valerie Dominguez on March 23, 2012 in LV Life 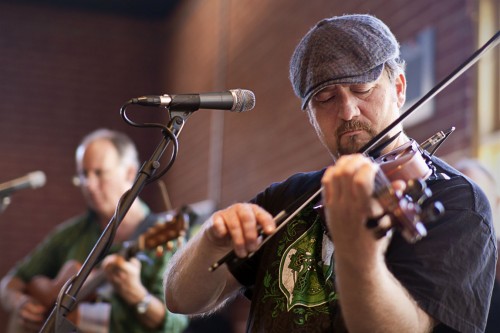 Michael Kelly of the Celtic folk band Sligo Rags performed Monday during the St. Patrick’s Day celebration in Davenport Dining Hall. Shepard’s pie and corned beef, as well as lime green Jell-o and other desserts, were served as students ate lunch to the music of Sligo Rags, which was named one of the best acoustic bands in Los Angeles by Folkworks Magazine. / photo by Scott Mirimanian

The end of spring break was celebrated with a bang at CAB’s St. Patrick’s Day event on Monday afternoon in Davenport Dining Hall.

St. Patrick’s Day is a cultural and religious holiday that has become a holiday of Irish heritage.

This holiday is always celebrated on March 17 and commemorates Saint Patrick, one of the most commonly recognized patron saints, and the arrival of Christianity in Ireland.

The event originally started as a religious holiday, but the celebration evolved into one of Irish culture and is now one of the most popular holidays around the world.

“We still wanted to do an event for St. Patrick’s Day even though the holiday was during spring break,” Ashley Cole, a junior psychology major and CAB multicultural chair, said. “I really like seeing everybody have fun.”

The band Sligo Rags took a break from playing at Disneyland and provided Irish folk music entertainment while students dined.

“It’s really lively and it overwhelms the room with musical happiness,” Dhaval Batel, a freshman business major, said. “I like how they go from fast paced to steady paced music.”

“I don’t mind the music that’s being played, I would just prefer it to not be so loud,” Raul Ocegueda, a business major, said. “Maybe they could have made this an outdoor event, that way we can enjoy the music and still be able to hear each other talk at the table.”

Anthony Juarez, a sophomore public relations major and CAB concert chair, was in charge of providing music and picking the right band for the occasion.

“I get to choose who gets to play and it’s cool because I can bring different genres here at school,” Juarez said.

Sligo Rags hails from Long Beach, Calif. and has been playing together for nine years.

The band consists of four band members and has Michael Kelly playing the fiddle and Jonathan Baer on percussion, bringing the beat to all the songs that were played. Gordon Rustvold plays the bass while David Burns plays the guitar.

“We wouldn’t play here if we didn’t enjoy it,” said Burns. “The food’s great and it’s totally different from where we live.”

Sligo Rags hopes to be able to play at La Verne again next year.

While the dining hall was filled with Irish folk music, students dined on decorated tables that followed the traditional green and white colors of St. Patrick’s Day.

Davenport’s tables were covered with pastel green tablecloths and the room was filled with festive balloons.

Informational placemats, which were made by Cole, stated various facts like “In Ireland, people traditionally wear a small bunch of shamrocks on their jackets and clothes.”

The tables also had take home gifts, such as mini St. Patrick’s Day frisbees and buttons, provided by CAB.

Students were given raffle tickets by CAB members for a chance to win a St. Patrick’s Day mug and a green blow-up cooler. Alexandra Hernandez was the lucky winner of the mug.

Davenport’s chefs joined in on the spirit by providing traditional Irish fare like corned beef and shepherd pie.

Green desserts, such as mint ice cream, Jell-O and dyed green cheesecake, were also served to add flair to the event.

Ireland’s heritage provided an entertaining afternoon of music and food for La Verne.

Valerie Dominguez can be reached at valerie.dominguez@laverne.edu.