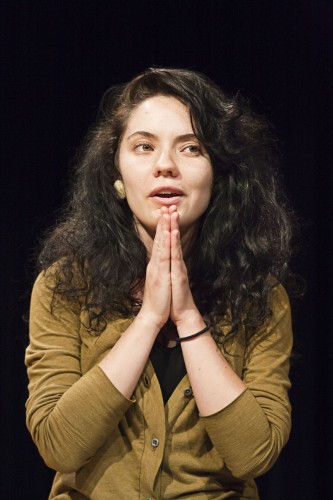 Shannon Garcia, a senior sociology and speech communications major, recites a poem about gender issues and marriage during the Open Mic event hosted by the Black Student Union and the Poetry Club on March 29 in the Jane Dibbell Carbaret. Garcia, a member of the Poetry Club, performed two slam poems. Other student poets shared verse that dealt with identity, family and death. / photo by Scott Mirimanian

Student poets were given a chance to showcase their talent March 29 in the Jane Dibbell Cabaret.

The open mic was put on by the Poetry Club and the Black Student Union.

Poetry Club president Eric Espinoza started off the night with his poem about a universal problem among college students: sleep.

“I wanted to try and open up with some comedy and lighten the mood, get everyone comfortable,” Espinoza said.

The second poet, Christopher Osuala, took the night in a different direction by performing a heart-felt poem about Trayvon Martin. The poem entitled “Unbroken Cycle” gave Osuala’s reenactment of the events leading up to the 17-year-old’s death.

“It did just not affect the black community; it rang throughout the nation,” BSU president Lynesha Williams said. “It really touched me.”

The next poet was Price Rose who performed his poem “Color Me Deep.” The long-breathed, fast-tongued poet gave one of the more artistic performances of the night.

As the night went on, more participants read poems about the death of Martin.

“A lot of the poets spoke about what was on their mind,” McWells said. “They used tonight as an outlet.”

The stage also saw one musician, Bree Salazar. She took her acoustic guitar to the stage and performed a cover of Bon Iver’s “Skinny Love” and also performed one of her own songs.

“Having her was great,” Williams said.

Woods also opened up to the crowd and spoke about his own issues. Woods performed two emotionally-charged poems: one about his father being in jail and the other about his own identity crisis with being black. Woods asked the question, “What makes a person black?”

“Myron is the perfect example of someone who people wouldn’t normally expect to go up there and open up like he does,” Williams said.

Shannon Garcia, Jensen Fluellen and Donia Taylor were other performers who took the stage.

A poet who did not sign up to perform was asked by McWells to go on stage and grace the audience with his mastery of verse. The poet was alumnus DeAntwann Johnson.

Johnson is one of the poets who got the poetry movement started at the University of La Verne. Johnson also recited a poem about Martin’s death.

Espinoza then took the stage one more time to open up to the audience by reciting a poem about his half-brother. Espinoza became emotional as he forgave his half-brother for all the horrible things he had done to his family.

“That was about my sixth or seventh time doing that poem in front of people,” Espinoza said. “It never gets easier, I left the stage shaking.”

Toward the end of the night, Shay Perkins took the stage for the first time at the University.

Perkins started off by reading a humorous yet true poem about her natural hair and how society views.

Perkins’ second poem of the night was dedicated to her boyfriend who is currently stationed in Japan.

The poem entitled “Beautiful Surprise” is her boyfriend’s favorite poem of hers.

The night had multiple shifts in direction from beginning with comedy, then moving to poems about the death of Martin and ending with the poets opening up to the audience about family and personal problems.

The final poets of the night were the boyfriend and girlfriend duo, Taylor and Rose, who took the stage one last time.

Taylor took the stage first reading a poem entitled “I Love You to the Point.” The poem, dedicated to Rose, gave a detailed description on how much she loves him; even to the point where she would be content to watch him leave her as long as it makes him happy.

Rose, the final poet of the night, took the stage and finished the night with two love poems. The first entitled “Throwback Love” and finally his version of “I Love You to the Point.”

The couple best demonstrated why audience members came to support local poets and why the poets were so comfortable going up on stage to share their innermost feelings with strangers.

The couple also symbolized the love that transpired in the Cabaret that night.

“When everything comes together like that, it’s a beautiful thing,” McWells said.