By Scott Mirimanian, Valerie Dominguez on May 11, 2012 in LV Life 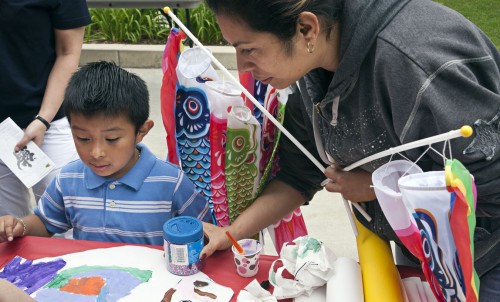 Five-year-old Steve Aguilar decorates a Koi shaped flag for his mother Norma Aguilar at the Japanese Culture Club’s Children’s Day celebration on May 3 in Sneaky Park. Children’s Day became a national holiday in Japan in 1948 and is celebrated every year on May 5. Families fly Koinobori, or carp-shaped flags, and eat traditional rice dumplings and other treats to celebrate the occasion. / photo by Scott Mirimanian

May 5 is usually thought of as Cinco de Mayo, but in Japan it is a national holiday called Children’s Day, which celebrates the happiness of children and expresses gratitude to mothers.

On May 3 La Verne’s Japanese Culture Club hosted the event in Sneaky Park to celebrate this national holiday.

“This is the first year we got to plan this event, seeing that we are a new club at this campus,” modern language department associate and Japanese Culture Club adviser Gloria Montebruno said. “We’re bringing back awareness to Japanese culture.”

The Japanese Culture Club’s mission is to bring the Japanese culture to the La Verne campus. Students of Montebruno’s

In the club, Japanese culture is learned and celebrated with origami, food, and entertainment.

“All students are welcome to join, including international students,” Montebruno said.

Chihiro Fujii, a graduate student and child development major at ULV, is one of the international students who is part of the club.

“I joined this club because I’m Japanese and I really like the Japanese culture,” Fujii said. “It’s good to see that other students are interested in it.”

“It’s fun being in the club; they help me practice my English while I help them practice their Japanese,” Fujii said.

Tables with informational posters made by club members were set up to inform students why they should join the Japanese Culture Club.

Various Japanese snacks like onigiri, which are flavored rice balls, and Hello Pandas, which are packs of cookies with chocolate in the middle, were scattered over the tables.

“It’s like a family and I enjoy learning new things, especially about this culture.”

Traditionally these kites symbolize members in a family through different colors. A carp itself symbolizes strength and success.

First students folded a long piece of paper in half vertically. Then they cut it into a carp shape and decorated in any way they liked.

“I took the Japanese class in the fall, I was always interested in this culture,” Cuevas said.

The Japanese Culture Club was also promoting their trip to Japan, which is set for January 2013.

“We were supposed to go on a trip last year but because of the earthquake we weren’t able to,” Montebruno said.

Valerie Dominguez can be reached at valerie.dominguez@laverne.edu.