By Christian Uriarte, Kristen Campbell on March 23, 2012 in News 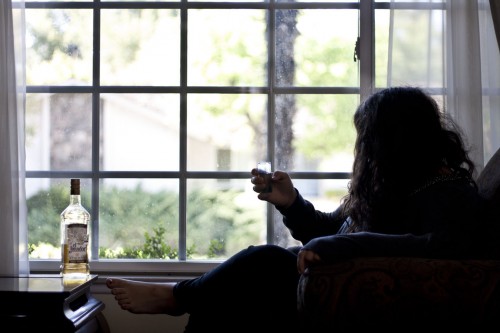 Editor’s note: Some names have been changed to protect the privacy of the individuals.

Leah originally did not think her drinking was a problem, even though after her first drink, she felt the need for more.

“When I walked into my first party, I saw it was a lot larger than I expected, but I did not think anything of it,” Leah said. She said her friend, Geneva, told her that it would all be fine. Leah listened to her and began to explore the party. Both Leah and Geneva’s names have been changed.

“I noticed a lot of alcohol and a disgusting smell, reeking of vomit, alcohol, cigarettes and people. I told myself this time would not be any different than other times I drank,” she said.

“I took a deep breath, felt the alcohol’s power flow through my veins, and smiled – I felt my ‘happy place,’” Leah said. As the party continued into the wee hours of the morning, Leah had had many drinks and she was intoxicated, but she did not care, because she felt happy.

Police officers broke up the off-campus party and the partygoers went their separate ways. Leah went back to her room, in a University of La Verne dorm, and fell asleep with the recognition that she was officially addicted to alcohol.

The next morning she woke up with a hangover, groggily got up for class and continued her day, only for it to end in another drunken stupor that very night.

Leah is a freshman at the University of La Verne.

During this time in her life, from September 2011 to late January 2012, she would drink four to six days a week, just to find her happy place, as she called it, and to escape the stressors resulting from being a new college student.

“I felt like my drinking started out as a joke. I would say that I had a bad day so I needed a drink and I would get a laugh,” Leah said.

“But that very night, since I knew the right people, I would be enjoying whatever drink I was craving.”

When she had her first drink, a Four Loko, she said she did not feel any of the alcohol’s influence on her body.

“The friends I was with thought I was cool because I wasn’t a lightweight and could handle drinking, even the first time,” she said. “But I didn’t feel cool. I already had the desire to drink, so I didn’t do it to please anyone but myself.”

The college life is something students dream about before they arrive.

It includes exploring the classes, living on campus, studying for your career and meeting new people.

Some ideas about what college is can be foretold to incoming freshmen by movies, but these movies glamorize the “get drunk, party all night, sleep all day” aspect of college.

One out of every seven college students admits to using alcohol or drugs, according to the National Alliance on Mental Illness.

Research studies on adolescent drinking have looked at the influence certain personality traits have on the risk of drinking, according to former Surgeon General Kenneth P. Moritsugu. However, the studies have failed to find specific traits in personalities that predict future substance abuse in adolescents.

Binge drinking, or bouts of excessive alcohol consumption, is another problem, which affects almost 40 percent of college students, according to the National Institute on Alcohol Abuse and Alcoholism.

“This is an important topic and a multifaceted problem,” said Dr. Thomas Hicklin, assistant professor of clinical psychiatry and behavioral sciences at USC, in a health.com article. “There’s a lot of peer pressure when it comes to binge drinking, but students need to protect their brains.”

According to the diagnostic criteria for alcohol abuse, in a diagnostic manual used by psychologists and psychiatrists, is “recurrent use of alcohol resulting in a failure to fulfill major role obligations at work, school, or home.”

Many students say their alcohol consumption affects their academics.

“I would not want to go to class most of the time, because I don’t like being judged,” Leah said.

She did not quit immediately because the “temptation to go back to the happy place was too much.”

The consequences of excessive drinking affect virtually all college campuses, communities and students, whether or not they choose to drink.

Benjamin Jenkins, ULV alumnus, has experienced the consequences firsthand without taking a sip of alcohol. He had a friend whom he was very close to for many years.

He invited her out to his birthday dinner and she declined, saying it was too early in the day for dinner.

Jenkins said that another friend showed up at dinner, saying she had seen the first friend at T. Phillips, drinking excessively.

He said she showed up at the dinner some time later “completely drunk” and the others at the dinner were embarrassed to be in her presence.

“She made an absolute fool of herself because she was so wasted,” he said. “This incident was the last straw to our relationship ending. Alcohol makes people do stupid things and I don’t want to associate with those types of people.”

Leah’s close friends and her resident assistant expressed concern about her alcohol consumption, especially because she was only 18, and she had recently started drinking.

“The more people expressed concern, the more I wanted to rebel, just to show that they did not own me,” Leah said.

“My phrase of choice then became, ‘I’m not an alcoholic. I’m just young and having fun.’”

Soon after Leah began drinking, she failed one class, did poorly in others and was put on academic probation after her first semester of school.

An estimated 25 percent of college students report academic consequences of their drinking, according to the NIAAA. These can include missing class, falling behind, doing poorly on exams and receiving less than satisfactory grades overall.

“College can already be a stressor to freshmen with tuition, choosing a major, uncertainty of today’s job market, keeping on track with grades and managing healthy relationships,” said Kathy Ellis, president of the National Alliance on Mental Illness, Chino Valley.

“Then some students choose to add drinking on top of all of that, just to have fun. Admittedly, college and drinking are nothing new, but sometimes the drinking is there to cover up underlying mental health issues that have not been addressed.”

Ellis said that this is the ideal storm for anyone dealing with the anxiety and pressures of college.

“Students think it can be so exciting to have the freedom to do whatever they want,” Ellis said. “But when they fall down, they realize their safety net is no longer there.”

Two to three weeks after Leah’s friends and resident assistant expressed concern for her substance use, she ignored that they were right.

“I basically told myself, ‘I have a problem, but I don’t give a crap,’” she said.

She said she kept her desire for help to herself for a month because she was embarrassed, especially in front of those who expressed concern.

“It’s sometimes hard for students to ask for help,” Ellis said. “They are fearful that their family and friends will be ashamed of their behavior.”

Ellis said that once someone comes to terms with his or her problem, it affects his or her relationships and interrupts his or her entire life, until they get help to stop their actions.

Leah was one of the luckier ones who was able to recognize her problem before something detrimental happened.

She said that she took a step back and looked at what made her happy in life before the alcohol created the alternate universe. She concluded that prayer and faith in God was her only way out, without embarrassment.

“If I would go to parties, it would be to look after my crazier friends,” she said.

Leah said quitting drinking was not as easy. She said that when exposed to alcoholic drinks, she would have a drink mixed with Sprite and then have “loads of water” for the rest of the event. After time of weaning herself off of alcohol, she was able to attend events and not crave it.

“The happiness that alcohol once gave me did not outweigh the consequences that I knew would result,” Leah said.

She said any positive reinforcement she received was a push in the right direction, like the previous concern prompted her to rebel.

Two months since quitting, Leah looks at current drinkers and can see that they have not come to terms with the fact they have problems too.

“I ask them if they had fun at the parties they went to, especially if they are obviously intoxicated, and they say they did,” she said. “But they cannot pinpoint one specific event that was fun.”

Leah considers herself lucky when she considers what could have happened to her.

“I have never felt closer to God or my family since this has happened. The closer I stay to them, the further away I am from my temptations.”

Not everyone can recover as easily as Leah. If you have a problem, please call these numbers:

Rocking out to the luck o’ the Irish
7,000 applications received for fall