By Kristen Campbell, Scott Mirimanian on April 13, 2012 in News

Suicide is the second leading cause of death among the college-aged population. 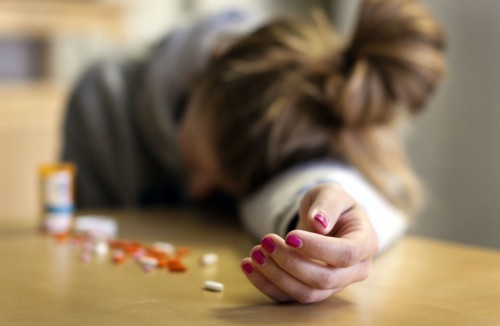 Suicide was the second leading cause of death among people between the ages of 15 and 24 in 2007, according to the National Institute of Mental Health. An estimated 11 suicide attempts happen for every suicide death. The National Institute for Mental Health states that most suicide attempts are expressions of extreme distress, not harmless bids for attention, and a person who appears suicidal should never be left alone. / photo illustration by Scott Mirimanian

Editor’s note: Some names have been changed to protect the privacy of the individuals involved.

By the time she was 15, Melanie already had more to deal with than most teenagers: anorexia, depression, insomnia.

“When my brother first got diagnosed with non-Hodgkin’s lymphoma, I did not want to deal with it,” Melanie said. Her brother was 19.

To clear her head on the day her family heard the diagnosis, she had gone to take a shower.

“I remember it was fall and it was gloomy and stormy outside, which added to my pain,” she said.

“I noticed a piece of glass on the floor of the bathroom from a broken decoration that had fallen in an earthquake six months before,” said Melanie, who asked that her real name not be used.

She picked up the piece of glass and was about to cut into her skin, when, like out of a movie, another earthquake shook the house and knocked the glass out of her hand. This was her first of three suicide attempts between late 2003 and early 2006.

Melanie is now a healthy senior at the University of La Verne.

During that time in her life, which lasted for about a year and a half, however, she said she was depressed, and she frequently thought about suicide.

More than 5 percent of college age students said they had actually attempted suicide, which is the second-leading cause of death for college students after car accidents, compared to its ranking of ninth among the U.S. population at large, according to the National Alliance on Mental Health.

“When my brother was at home, my mother would take care of him.

“My siblings and I were home-schooled to help ease the strain on my mother and we would help her with everything. I was the youngest of five kids with two older brothers and two older sisters.”

Melanie’s family was religious, which she said helped her not “fall as hard as (she) could have.” Her mother focused her energy on her brother, so she and her three other siblings learned that they would have to take a backseat in the family priorities.

“Most suicidal people are focused on the present and want an escape from problems that seem overwhelming at that time,” said Kathy Ellis, president of the National Alliance on Mental Illness, Chino Valley.

Ellis said those that are having thoughts of suicide often feel powerless to cope with their problems and do not see a bright future.

Studies have found that mood disorders and substance abuse are more common in those who successfully commit suicide. Among those with two or more of these risk factors, the likelihood of actually committing suicide increases.

Many suicidal people have more than one mental disorder at work in their brains, such as major depressive disorder and other mood disorders.

“After a while I was the only one in my family that was still home-schooled,” Melanie said. “I just wanted to do homework, so I constantly skipped meals and didn’t sleep at night.”

At the same time, she felt very depressed and alone, because of the lack of attention from her older siblings and parents.

She did not come to terms with the source of her depression, her brother’s illness, because it was “too much to handle.”

Melanie also had a horrible secret she felt she couldn’t share with her family.

“I was also carrying the burden of being the only one that knew I had been molested by three of my peers when I was 13,” Melanie said. “I felt so dirty and I was about to come clean, but I didn’t think it was as important as my brother’s health.”

Melanie only told her parents about having been molested seven months ago – nearly 10 years after the original incident occurred.

Melanie’s brother did not recover from his cancer. He died in early 2006.

One month later, Melanie was put on Prozac for her depression.

“The Prozac made me really drowsy, and in combination with my hidden anorexia, it would make me want to sleep for days at a time,” Melanie said. Her therapist prescribed her with a third type of antidepressant.

“All I remember is my therapist telling me to ‘be careful with this one’ because a side effect was suicidal thoughts,” she said.

The first night she took the medication, Melanie slept on a mattress next to her parents’ bed, just so they could keep an eye on her. At 2 a.m. that day, she remembers her eyes shooting open and her first thought was a clear visual: to walk down the hallway into the kitchen, take a knife, and kill herself. She knew she was hallucinating, but followed the visual.

“This time, I did not put the knife against my wrist, but against my heart, because that is what was hurting the most,” she said. “In this struggle I kept asking God why he would not just let me die instead of allowing me to sit here on earth and suffer.”

When Melanie was about to plunge the knife into her chest, she recalls feeling an invisible force “smacking” it out of her hand and to the kitchen floor. Her mother woke up and they met in the middle, holding each other and crying.

“I told my mom what I had visualized and how close I was to actually doing it,” she said.

Melanie did not try to kill herself again for four more months, but she was still anorexic, an insomniac and severely depressed.

“The third time I attempted suicide, nobody was home when I was pondering it,” she said. “I was in my room reliving the memories of the struggles I had gone through in the past years.”

Unexpectedly, her two older sisters and mother returned home early from work, but Melanie was still in her room alone.

“I was looking at my bottle of antidepressants wondering why they did not help,” she said. “I poured the 12 capsules into my hand, took a deep breath, and took them all.”

At the time she was still anorexic, so she felt overcome with exhaustion within 10 minutes. Her heart began to race and she became afraid of what was going to happen.

“The sound of my heart flashed me back to how my brother’s heart sounded right before he died,” she said. “It then hit me that I was so selfish for trying to take my own life, when my older brother fought so hard and long for his.”

Her mother told Melanie’s older sisters to call an ambulance. Melanie remembers hyperventilating before she fainted. Though her memory of that day is foggy, she does remember waking up momentarily in the hospital to nurses and doctors flushing her system by pumping her stomach and her blood.

“My mother told me that I had to get professional help,” she said. “I went to a therapist for about a year and during that time, I admitted I was depressed, suicidal, anorexic and an insomniac. I still did not tell anyone I had been molested.”

The No. 1 cause for suicide among students is untreated depression, according to suicide.org, a nonprofit organization whose mission is to prevent suicides, support survivors and educate the public. Going to college can be a difficult transition period in which students may feel lost, inadequate and stressed, which can lead to the thoughts of suicide.

Another cause of suicide attempts is exposure to others who have succeeded in their attempts to kill themselves.

Dr. Thomas Hicklin, assistant professor of clinical psychiatry and behavioral sciences at USC, said exposure to suicide tends to cause more attempts. Some who are dealing with these depressed thoughts do not consider suicide until they see it happen to a friend, and then deem it as “acceptable behavior.”

Suicide is a serious problem that has lasting effects on individuals, families, and communities. The goal of suicide prevention is simple: reduce factors that increase risk and increase factors that promote resilience, according to the Center for Disease Control and Prevention.

Organizations as the Suicide Prevention Resource Center provide technical assistance, training, and materials to increase knowledge and expertise of suicide prevention practitioners, according to their website. Funded by the U.S. Department of Health and Human Services, the SPRC strives to help educate the community on how to prevent suicide to expand.

Melanie has been off of her antidepressants for a year to date, is at a healthy weight and sleeps well at night. She says she cannot deny there are not times she wishes she could have the “at ease” feeling her medication used to bring, but she is happy she does not have to deal with the suicidal and unstable feelings anymore.

“I’m sure my brother is looking down from heaven, proud that I did not take a life that is precious enough to keep around for a while longer,” Melanie said.