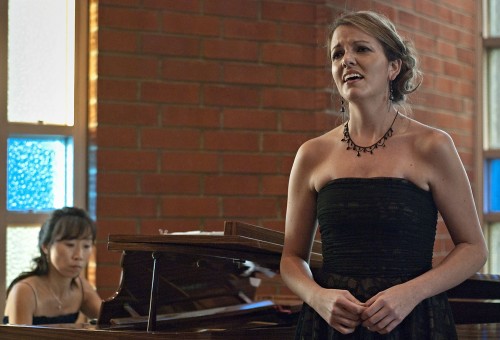 Melissa Stahly, soprano, sings “Donde Lieta,” with Eunyoung Sohng playing piano, in the University Chapel for the Music Department Alumni Recital. Stahly, who completed her bachelor’s degree in music at La Verne, has performed in many choirs and has also performed in the opera “The Medium.” Sohng graduated from La Verne as a major with an emphasis in piano and works as a music tutor for both La Verne and UC Irvine. / photo by Scott Mirimanian

The University Chapel was host to visiting alumni Saturday as they performed various pieces in a special appearance.

“No outside people wanted us to do this. We volunteered and wanted to perform,” said Eunyoung Sohng, the pianist for the evening’s performance.

She organized the event with the help of the music department.

Sohng began the evening with a carefully played Sonata in A minor.

With each careful press of the keys she swayed to the music with gentle movements to emphasize each note.

“The difference with the piano is memorization,” said Sohng. “I’ve gone three and a half years without playing a solo and I was really scared.”

Sohng used the recital as a chance to see how far she had progressed as a pianist.

Michael Fausto, tenor, followed Sohng’s performance with a collection of songs by Franz Schubert in German.

“I was nervous,” Fausto said. “It was very intimate and I’ve sung for bigger crowds that I don’t really know, but it’s nerve-wracking because all of these people know how hard we’ve worked and now I’m performing for them.”

Fausto carefully positioned himself near the front of the chapel and gently began his first song, showing emotion with slight movements of his hands and closing his eyes to show feeling in the foreign lyrics.

“I have a checklist that I run through when I perform,” Fausto said. “I always remember to sing forward, to have a straight back and make sure I’m pronouncing everything clearly.”

Next up was Melissa Stahly, soprano, who followed Fausto’s pieces with three from Richard Strauss’ songs, also in German.

“I was a little nervous before going on, but confident,” Stahly said. “I was just trying to remember everything as I sang.”

Stahly amazed the group with her perfect pitch and unbelievable volume that seemed to come from an outside force instead of her mouth.

“I feel good. It’s always so exciting putting stuff like this together,” Stahly said.

The recital concluded with “Anything You Can Do, I Can Do Better,” a playful piece from the musical “Annie Get Your Gun.”

Stahly and Fausto Attempted to best each other with vocal challenges as the audience laughed and applauded the two performers.

As the final notes were sounded, the three performers took a bow as those in the audience applauded and whistled in appreciation for the amazing musical experience.

“I really enjoyed the recital,” said Chris Kaelberer, a business major. “I know them and its great to see people you know so hard and this be the result.”

Kaelberer attended as both an audience member and as a volunteer to assist with an introduction for the recital and the movement of the grand piano so the singers were not forced to sing from behind the large instrument.

“Unfortunately this kind of thing doesn’t happen all that often,” Kaelberer said. “Hopefully this gets the word out and other alumni will come perform as well.”