Multiple candlelight vigils were held across Southern California Monday, giving citizens the opportunity to pay tribute to the lives lost at the Inland Regional Center during a terror attack Dec. 2.

Families and friends attended the vigils lighting up the night by candle light as they sat in silence listening to speeches, songs and memories of the 14 victims.

Thousands of students gathered for a vigil at Cal State San Bernardino, where five of the victims and one of the shooters, Syed Farook, attended school.

After a moment of silence, the crowd turned its attention towards the clock tower which rang 14 times.

The vigil ended with students singing “Imagine” and “Let it Be.”

The day after the attack a makeshift memorial was set up by the community on the corner of Watermen Avenue and Orange Show Road, just a short walk away from the Inland Regional Center.

Since then, the memorial has grown tremendously and now consists of hundreds of lit candles, a wooden cross, flowers, posters with hand-written notes and a prayer booth set up by The Way World Outreach church.

The memorial gave the community the chance to light candles, donate flowers, write messages on the posters and pray for those who lost their lives and the people affected by the tragedy.

Visitors have been stopping by the memorial nonstop since last Thursday, offering prayer and kind words to those in need.

“You don’t gain anything from just killing those people, it was just hate and violence to hurt people. It’s just hard to grasp.”

On Dec. 2, Syed Rizwan Farook and his wife Tashfeen Malik killed 14 people and injured 21 in a mass shooting at the Inland Regional Center in San Bernardino.

The married couple targeted a holiday party at the center that had about 80 attendees.

After the shooting, the couple fled the scene.

Four hours later, after being found, the couple was pursued by police. Both were killed in a police shootout.

President Barack Obama has called this shooting an act of terrorism.

According to the website Mass Shooting Tracker, there have been more than 350 mass shootings in the United States in 2015 alone.

This attack is the second deadliest mass shooting in California after a mass shooting at a McDonald’s in San Ysidio in which 21 people were killed in 1984.

Another recent shooting in the nation which is similar is the Sandy Hook Elementary Shooting in 2012.

Tragedies like these are becoming more apparent to the nation.

“The people are finally just getting on with their lives. We won’t ever forget. Our community is just uniting and growing stronger,” The Way World Outreach Pastor Ernie Ceballo said.

Alexandra de Leon can be reached at alexandra.deleon@laverne.edu. 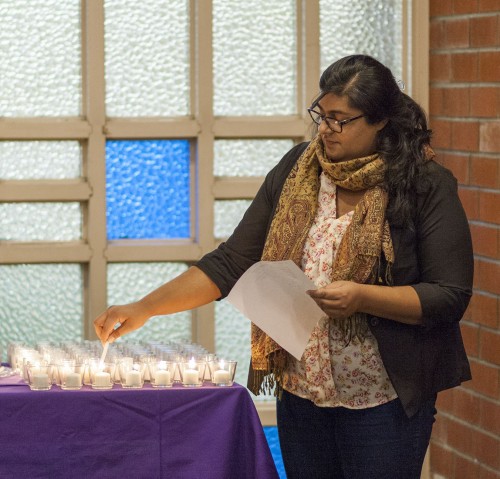 Hasfa Arain, interfaith leader from the Muslim community, helps light candles in remembrance of the lives lost in the San Bernardino mass shooting. The congregation was asked to say a positive human character trait for each candle as the names were read. The vigil was one of many across the country and this shooting was one of 350 mass shootings in the United States in 2015 alone. The vigil was held Dec. 3 in the Interfaith Chapel. / photo by Terrence Lewis