By Daniel Torres, Lauren Harchut on November 6, 2015 in LV Life 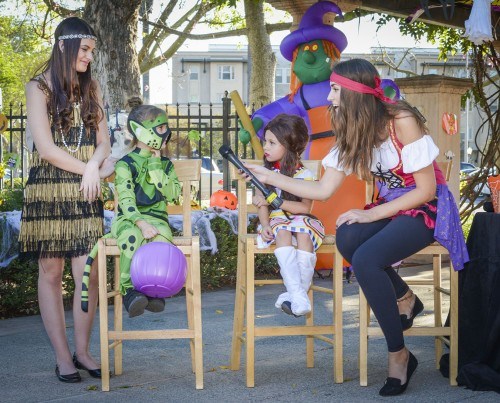 Halloween Spooktacular is an unscripted event, so the hosts must improvise for the majority of the show, but they are given cue cards with jokes to read as they wait for guests.

“It’s a community TV show that we partner with the city of La Verne to get kids on trick or treating have some fun, see their fun costumes and we invite dignitaries from the city and the community to be on the show,” LVTV operations manager Shane Rodrigues said.

During the broadcast, Harrison and Alilovic entertained viewers with jokes and Halloween stories.

Trick-or-treaters and other audience members were also invited to take a seat and share their own Halloween stories and jokes in exchange for candy.

“My favorite part about hosting Spooktacular is getting to meet all these adorable kids in fabulous costumes,” Alilovic said. “Some kids even wanted to sing and dance for the show, it was very cute.”

La Verne also hosts an annual Halloween coloring contest where children choose a picture at City Hall and decorate it. The winners pictures are presented on screen during Halloween Spooktacular.

Halfway through the show, La Verne City Council members Robin Carder and Tim Hepburn, along with the Community Development Director Hal Fredericksen, took their place on screen and they awarded the city’s Halloween Coloring Contest winners with prizes.

“The show is all about the kids wanting to be a star dressing up,” Fredericksen said. “Because they already are a star in their own mind, but now, they get to be on camera and a television show, so they get to feel like a real star.”

Even the LVTV crew joined in the holiday spirit and dressed up as firemen, baseball players and flappers.

“I love seeing all the kids and seeing their costumes and how creative they are and you get the ones that are cute and sing and dance, and that’s what its all about,” Rodrigues said.

During Halloween Spooktacular, the businesses in Old Town La Verne also host a fun and safe trick-or-treating event for children.

Families dressed in costumes and lined up outside of shops as kids impatiently waited to get their candy.

Businesses in Old Town such as Roots Hair Salon, House of Wings and Roberta’s Village Inn, participated in the annual trick-or-treating event by decorating their shop and passing out candy.

The show aired on Halloween on LVTV-Channel 3 and will re-air again this November.