By Terrence Lewis, Zachary Rodriguez on April 15, 2016 in News 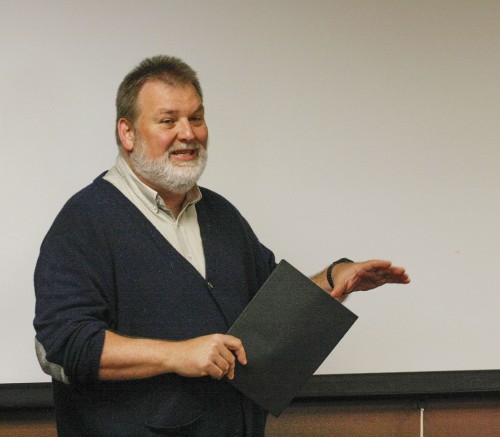 Unlike a traditional faculty lecture, Dillon only spoke for a short time before bringing out actors to give the audience a better glimpse into his project.

Dillon and producer Curtis Krick wrote and composed “Fool’s Gold,” a musical that draws inspiration from the Irish play “The Playboy from the Western World,” written in 1907 by John Millington Synge.

“Only the structure and some of the story elements are from the original play.” Dillon said. “All of this is newly written.”

“Fool’s Gold” is a musical comedy that takes place in the 1869 gold rush in the Klondike Mountains of Washington state.

Aside from traveling for the gold rush, characters in Dillon’s play are hoping to stumble upon situations that would make them legendary.

“This adaptation was about finding a new audience for the story,” Dillon said.

The play follows a character named Powder Keg who becomes famous in an unconventional way – for killing his father.

A dozen La Verne students and one of Dillon’s former professors helped bring his project to life, singing eight songs from the new musical.

“Being able to work on a new show, you get to play around with it and it was a lot of fun to work on,” senior theater major Emily Jardel said. “It has been years since I was able to participate in a musical so getting that opportunity was exciting.”

The student performers sang songs about living in a town where someone became famous for something unusual, and how not everyone is who they pretend to be.

“I can’t wait to see the musical,” senior kinesiology major Melissa Hernandez said. “As a senior, this was really interesting because I have seen the theater grow in the past four years.”

Throughout “Fool’s Gold” characters are placed into interesting situations highlighting that one can become famous for ridiculous reasons.

“At the end you see why it is called ‘Fool’s Gold’ and you don’t really expect what is going to come next,” freshman accounting major Justyn De Azevedo-Correa said.

“Fool’s Gold” will have a final read through May 5. The play will be in pre-production this summer and ready for the stage in fall 2016.

Zachary Rodriguez can be reached at zachary.rodriguez@laverne.edu.