By Kendra Craighead, Terrence Lewis on April 29, 2016 in News 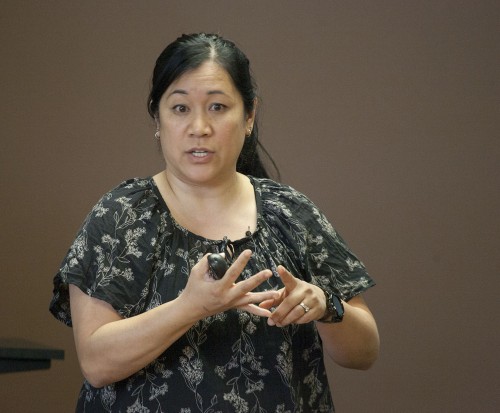 Ngoc Bui, associate professor of psychology, proposed that fans of celebrities in the modern era have such affinity to whoever they idolize that it obscures their social judgment.

Today’s celebrity can come from anywhere, Bui said during her lecture Tuesday in the President’s Dining Room.

YouTube and Vine have produced personalities such as Tyler Oakley and Andrew Bachelor, known as King Bach.

Celebrities are closer than ever to their fans through social media, creating “fandoms” and followings that range from recreational to obsessive, Bui said.

“A celebrity used to be someone who the masses of society deemed worthy by their deeds,” Bui said. “Nowadays, people can be famous just for being famous.”

Bui asked in her survey what a person would do if he or she heard or saw a celebrity doing something wrong, and she consistently found that it hardly altered the person’s perception of his or her icon.

She presented her research on the psychology and sociology of fans and the celebrities with whom they identify with.

Bui compared Martin Luther King Jr. and George Washington to Donald Trump and Kim Kardashian, but said her research was not centralized around any specific pop culture icon.

Instead, her questionnaire focused on emotional and social responses to any given person’s idealized celebrity.

“Who did you evaluate for this study? Does the college matter? La Verne is such a small place, how can you make such large generalizations?” Clark said.

Bui said she used her students, mostly from an introduction to psychology course, for which she argued that anyone could enroll, so it opened up the survey to more than just psychology students.

Despite the smallness of the study, Bui said she did not see how a student’s major could influence the emotional connection to any given celebrity and felt confident that her data could support her general statements.

Bui said the results of her research showed that people were unwilling to stop following their favorite celebrity even if they were to see or hear them acting inappropriately.

“It seems to me that the perception of Bill Cosby has changed dramatically, and I am curious as to where that tipping point exists,” Marcus said.

Bui agreed and pointed out that inappropriate behavior and drug abuse were different than sexual assault or murder, and that specific actions could or could not draw the line for fans.

She said this displayed a lack of social judgment on the participant’s part; however, it did not affect how participants felt about themselves. Celebrities seem to be able to commit all sorts of offenses, but still maintain fan loyalty.

“Where is the line? I don’t know, but it is interesting,” Bui said.