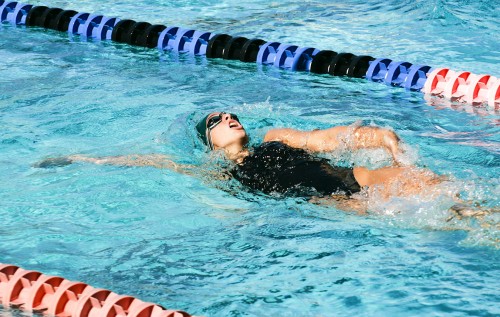 The La Verne swimming and diving team started off the 2015-16 season with a splash at Saturday at Haldeman Pool at Pomona-Pitzer. Sophomore Mary Hanna competes in the women’s 3×100-yard backstroke relay, with teammates junior Krislyn Cha and sophomore Rachel Miyoga. The three swimmers finished sixth collectively with a time of 3:15.56. / photo by Terrence Lewis

The La Verne swimming and diving team had three top-five finishes at the Pomona Relays on Saturday at Haldeman Pool at Pomona-Pitzer.

After 20 events, Cal Baptist took first in both the men’s and women’s competitions.

La Verne head coach Pat Skehan said the opener was a chance to introduce the freshman to real competition after a long off season of training.

“We have a lot of young kids (this year),” Skehan said. “It gives us a chance to try things out, throw things together.”

The team of junior Miranda Chavez, junior Krislyn Cha and freshman Rachel Fox finished with a time of 3:05, four seconds behind second-place Pomona-Pitzer and 10 seconds behind first-place Cal Baptist.

Concordia finished fourth in the event with a time of 3:07 and two teams from Pomona-Pitzer took second and third with times of 3:01 and 3:06, respectively.

Cal Baptist again took first in the event, with a time of 2:58.

Captain, senior Alexis Smith, said there were some positives to take away from the season opener, but there is also room for improvement.

“We start playing it safe when we don’t know if we’re going to get tired or get exhausted throughout the meet,” Smith said.

The only top-five finish for the men’s team came in the 200 freestyle relay.

Juniors Timothy Polman, Harry Bennett, Daniel Carpenter and freshman C.J. Woodward finished third with a time of 1:28, just a few seconds behind the winning team from Cal Baptist, who had a time of 1:25.

Pomona-Pitzer finished second in the event with a time of 1:26.

Woodward said he would be looking to improve for the rest of the season, but enjoyed competing in his first relay with the team.

“I could have been better on some of my backstroke events, but at the end my 50-free, I got a best time that I’ve ever done so it felt good,” Woodward said.

Entering the season, La Verne has more freshman than upperclassmen on the team and Skehan admits it will be a challenge for the upcoming season, but has faith in the captains to lead the team in the right direction.

Skehan said she was impressed with Smith, sophomore Harry Bennett and sophomore Daniel Carpenter in the opener.

“The leadership on the top has been really good,” Skehan said. “It will bode well in the future.”

Last season, the women finished sixth in the Southern California Inter­collegiate Conference and the men finished seventh, but Smith said the influx of freshman would help the team get where they want to be.

“They’re all encouraging each other and getting off the wall fast and that’s what we like to see at the beginning of the season,” Smith said.

Woodward said there should be no challenges with the team dynamic.

“I feel the being close definitely helps with just motivating each other in the races,” Woodward said. “If your happier swimming and you have more people yelling for you, you normally do better.”

Next for La Verne is their first home meet of the season, as they face the Occidental Tigers at 1 p.m. Saturday at the La Verne Aquatics Center.