By Alexandra Felton, Sarah Vander Zon on November 18, 2016 in News 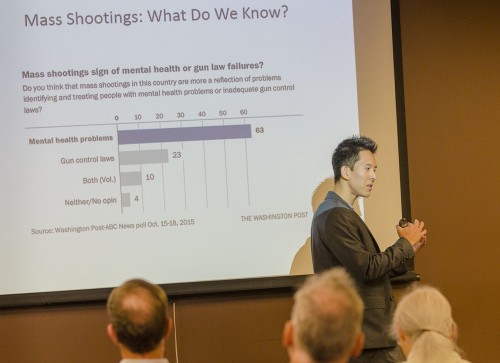 Assistant Professor of Sociology Roy Kwon discusses the socioeconomic determinants of mass shootings Tuesday in the Presidents Dining Room. In his research Kwon found that half of all mass shootings occur in public places. His talk was part of the weekly faculty lecture series. / photo by Sarah Vander Zon

Mass shootings are no laughing matter especially when they happen close to home.

Roy Kwon, assistant professor of sociology, spoke about the socioeconomic determinants of mass shootings Tuesday in the President’s Dining Room.

For 11 months, Kwon and Assistant Professor of Sociology Joseph Cabrera studied the increase in mass shootings in America, to try to understand the cause of the increase.

“Originally, I had no interest in this topic,” Kwon said.  “But after being a casual observer, … I started to get disturbed and wondered what was truly driving this phenomenon,” Kwon said.

Kwon addressed possible motives of the shooters including mental illness, but said there is likely something more to the equation.

Inequality is another cause, Kwon said.

He found that income inequalities, the actual contrasts in communities between poverty and affluence, may also be to blame for this kind of violence.

Kwon said his research is not done. His hypothesis at this point is preliminary.

At the end, some seemed to connect to Kwon’s ideas.

Amy Loebs, sophomore chemistry major, had a personal connection to this topic.

“I grew up in a high inequality town that had really bad shootings there,” Loebs said.

“It makes me wonder about the safety of our future,” Loebs said.

The next faculty lecture will be Assistant Professor of History and Archivist Ben Jenkins’ “The Octopus’s Garden,” held at noon Tuesday Nov. 22 in Wilson Library 172.