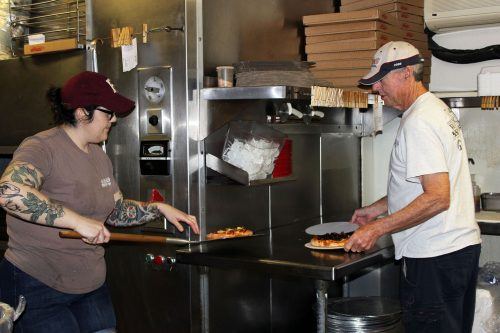 Sasha Schonfeld removes a personal-sized pineapple and jalapeno pizza from the rotating baker’s oven and passes it off to her father, Warehouse Pizza owner Kenny Schonfeld, for cutting and packing. Warehouse Pizza is a staple in the downtown La Verne community. / photo by Emily J. Sullivan

Warehouse Pizza is La Verne’s friendly neighborhood pizza joint that has regulars driving in from all over the state to get a taste.

A building with a peaked roof, deep-red awnings and a large outdoor dining area filled with grinning patrons clinking glasses and passing each other plates under the shade of a wooden covering welcomes you to the neighborhood.

The establishment is the home of some seriously popular pizza.

Warehouse Pizza is a staple in the La Verne community that has been here for nearly 50 years and has customers driving for miles to find out what all the buzz is about and then returning for years to come once they do.

Warehouse Pizza has not always been a favored pizza joint, in fact before 1972 it was just a warehouse.

John Knerr owned the space and ran a belt and tie warehouse out of it, supplying the carousels that were common in the grocery stores of the time.

In the early 1970s though, he decided the warehouse was more suited for pizza.

In 1986, after Knerr had passed away, his son sold Warehouse Pizza to Kirk Anderson and Kenny Schonfeld, a Pomona native who has been in the restaurant business since the age of 15.

The pair ran the business together until 1994, when Anderson left.

Schonfeld has kept the place thriving for over 30 years now and credits the family-run atmosphere, old-fashioned methods and top-notch ingredients for the restaurant’s success.

“The hard part of running a business is every single day you have to get the place ready, make sure your employees are motivated, you have enough product – all these things that I just do second-nature because I’ve been doing this for so long,” Schonfeld said. “We hold onto our employees and people like seeing those same faces. It’s almost 50 years old and that speaks for itself.”

The restaurant business is notoriously unstable as far as longevity is concerned yet, Warehouse has managed to beat the odds and keep its door open, in a quaint downtown area, for over three decades.

Sasha Schonfeld, Kenny’s daughter and Warehouse Pizza’s heir apparent, says the business has not only maintained stable annual revenues but says they are much better than stable.

To what and whom does Warehouse owe this success? Her business savvy dad.

“He’s been doing this his entire life. He has a business sounded mind, in a way that is insanely intricate, and it shows,” Sasha said. “Not just that, we do whatever we need to do. I break down the boxes and throw them in the recycle, my dad will be in here washing dishes when we’re short-handed. It’s as little as just doing whatever you need to do. We’re all cogs in this machine.”

Since the 1980s, prices have naturally had to increase, but Sasha says they keep it simple and reasonable and aim to account for the higher cost of overhead and the salaries of their employees, but other than that they’ve always kept things at a business model that focuses on simplicity.

The restaurant has had people driving for miles to enjoy the thick-crust pizza that Warehouse Pizza is known for.

Jillian La Rocque, a regular patron of the restaurants in the downtown La Verne area said she has been making the trip for over a decade.

“I used to come to Warehouse Pizza all the time with my friends when I was a teenager, all the way from Rancho Cucamonga, at the time it felt like such a trek but it was worth it,” La Rocque said. “I’m obsessed with the garlic breadsticks and the pizza, I would be able to identify that it’s Warehouse Pizza in a taste test, it just stands out from other pizza places that much.”

Schonfeld said that after Neil Saavedra, the host and producer of “The Fork Report” on KFI-AM640’s program for foodies, gave an out of the blue shout-out, all of the sudden patrons were driving in from Torrance and the valley.

Pizzas at Warehouse are all hand-thrown and cooked in a rotating baker’s oven, the old-fashioned way.

Schonfeld said while many pizza places have switched to using conveyor belt ovens, Warehouse relies on the old baker’s oven to perfect their signature thick-crust style.

They use plum tomatoes for the distinct flavor and lower acidity and Wisconsin mozzarella cheese for the especially rich and smooth quality.

He also said that because business is always booming, the ingredients are always fresh.

Sandwiches, salads and spaghetti are all top-notch quality because of the quality of the ingredients – from the basil to the turkey meat, the ingredients are ordered with very specific consideration.

The company that supplies Warehouse Pizza with these ingredients is Cerenzia Foods Inc., a family-run company located in Rancho Cucamonga that has kept Warehouse supplied since Schonfeld took over.

Brothers Tony and Joe Annunziato go way back with Schonfeld.

“Joe came by to bring me some cheese and bumped into one of my employees in the kitchen,” Schonfeld said. “Next thing I know she’s married to Joe and six kids later… It’s funny how things work out.”

Tony Annunziato said restaurants are successful for a number of reasons.

“Warehouse Pizza is successful because of Kenny’s incredible leadership,” Tony Annunziato said. “He has created a comfortable atmosphere, hired awesome staff and uses the best possible ingredients to make his food. His commitment to providing an excellent product has created a business that people talk about and that keeps a restaurant alive and thriving.”

On a busy week night at Warehouse, Shane Higgins works behind the counter taking orders and popping in and out of the kitchen. He said the secret to Warehouse Pizza’s success is “good workers and really good food.”

“We’re a staple in La Verne, we’re accessible to everyone. People like to have team parties, birthday parties . . . they celebrate every occasion here and we’re accommodating to that,” Higgins said.

What makes the food so good according to Shane?

“I think we just put a lot of heart into it.”