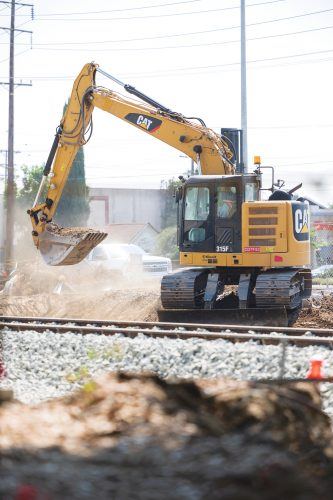 Despite sometimes seeming like we’re in the midst of a magnitude 8 earthquake – at least on the south side of campus adjacent to Arrow Highway – safety and communication are the city of La Verne’s top priorities, say officials, as construction of part of a 9.1 mile Foothill Gold Line extension project to build new stations from Glendora to Pomona is ongoing.

The La Verne station, set to open in early 2025, will feature a 299-space parking facility with bicycle parking, electrical vehicle charging stations and drop off areas. The station’s design will be unique to the city of La Verne with artwork from local artist Blue McRight, highlighting the city’s architecture and historical connection to water and the citrus industry.

With a project as large-scale as this, it is necessary to safely relocate underground utilities such as water, sewer, gas and power lines before moving on to installing the new light rail tracks, later reconstructing the area to build the new La Verne station.

Ho said the construction team must place a layer of compacted road base under the tracks’ ballast stones and vibratory compact them.

University of La Verne students, staff and faculty in the Arts and Communications Building and Oaks residence hall were most impacted by the noise and shaking of the nearby construction during the past several weeks. They experienced the intense vibrations and shaking of walls, which raised more than a little concern among the old buildings’ occupants.

“I think that most of the faculty were probably most impacted because their offices are against that wall,” said Malissa Hernandez, communications department coordinator.

The Communications Department is housed in the basement of the Art and Communications Building, which sits very close to the tracks and construction site.

Ho said Kiewit-Parsons is required by contract with the Foothill Gold Line Construction Authority to implement a noise and vibration monitoring plan throughout the project. He said an environmental engineer ensures that the level of vibration, noise and shaking is within a safe threshold.

Miller said before starting any construction, he and the Kiewit-Parsons team documented the state of each of the rooms in the Arts and Communications Building using photographs to ensure no differences occurred before and after construction.

He said he conducts regular inspections of the nearby buildings, checking for any visible signs of leaks, separations and cracks that could be a potential safety issue.

Miller said he has not seen any evidence of structural damage yet.

“The buildings are definitely safe,” Miller said. “If they weren’t, I would not allow people to occupy them. I’m in those buildings frequently, I don’t have any concerns whatsoever about the safety of the buildings.”

Miller said they are in the process of hiring a structural engineer to do a full assessment, but with schedules and contracts that need to be worked out, it may take a while.

The construction team has now finished relocating the underground utilities and old freight train tracks on D street and is now moving on to working on the new light rail tracks.

“Now that the shaking has stopped and that part of the job is complete, now’s a good time to go and reassess and see if there’s any potential damage,” Miller said. “I don’t believe there is, based on my assessment being a licensed engineer, but it’s always good to have that third party, just an abundance of caution to give us a clean bill of health to make sure that there are no issues impacting that building.”

Earlier in the semester, Lisa Lester, associate director of housing operations at ULV, said she was notified that the water needed to temporarily shut down in the Citrus and Vista residence halls due to the construction team working around underground utilities.

The team agreed to shut off the water from 7 a.m. to 8 a.m. Residents were notified of this, but it ended up taking longer than anticipated.

“We have to be not proactive but reactive to situations which are not ideal… with construction, sometimes things don’t go as planned,” Lester said.

Lester said residents were quickly updated via an email and text messaging system.

“Our goal is to make sure that students get the messaging and are alerted of such cases and then obviously, if something is going to be a health and safety concern, we address it immediately,” Lester said. “That’s the main goal to keep our students safe.”

Hernandez said she and other University faculty and staff were sent email notices outlining the street closures in mid-July before returning to work on campus.

The notices included a map showing that the railroad crossing on D street north of Arrow Highway would be closed from early August to late September, followed by further local street closures.

As the construction team begins to prepare for the construction of the station, which will begin within the next year, the main University parking structure entrance and Arts and Communications Building’s parking lot will be closed off.

Left hand turns heading toward D Street and Second Street will be prohibited to avoid cars being backed up on the tracks, as Gold Line trains are expected to pass every six minutes or so.

“It was just an abundance of caution and safety to make sure that we’re well prepared for the Gold Line to start having those frequent crossings and make sure that we have safe pedestrian access as well,” Miller said.

A designated pedestrian crosswalk will allow people to safely cross D Street from the Arts and Communications building to Leo Park.

The La Verne Station will be a center platform station, with light rail tracks on either side. The entrance will be available on E Street and White Avenue.

The station and its parking facility will be located between ULV and the Pomona Fairplex, north of Arrow Highway and east of E Street.

“Overall, I definitely feel like it’s going to be a positive project for the city and the University. From the standpoint of commuters, maybe they could come in using the metro,” Hernandez said. “I think it’s awesome. I think it’s really great.”