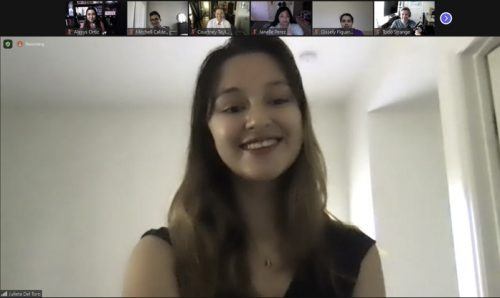 Due to the pause on live performances, the University of La Verne Music Department’s virtual recital featured both vocal and instrumental performances ranging from theatrical musical numbers to Spanish love songs at noon on May 7 via Zoom for an audience of 42.

With spring 2021 marking the third semester since classes transitioned to online, students taking studio lessons in the music department have adjusted to performing for a virtual audience.

“Everybody’s really grown as singers and performers even in this weird environment. It’s pretty impressive,” Courtney Taylor, applied voice instructor in the department, said. “They’ve actually learned a different skill set that we never would have taught, which is the camera acting angle. We’re not even acting, but lining up and speaking to a camera lens… is a much broader focus.”

One-by-one, each performer introduced their prepared piece and captivated the audience’s attention from their screens.

Cristina Soto-Arredondo, junior business administration and Spanish major, strung the melody to Tercer Cielo’s “Yo Te Extrañare” on her acoustic guitar while she passionately sang the lyrics in Spanish.

The audience was serenaded by freshman educational studies major Lauren Jacoby’s performance of “What I Did for Love” from the musical “A Chorus Line” by Marvin Hamlisch.

The audience shared a digital round of applause throughout the recital using Zoom’s chat features.

“I know there are a lot of new people who this was their first recital and I’m just really proud that they were able to put themselves out there,” Kate Correnti, senior music major, said.

Correnti said she can hear improvement in her peers’ performances and how they applied the coaching and feedback they receive from their instructors in their weekly classes.

“I’ve heard a number of these pieces before today and I think it’s really cool to hear other people’s progress,” Correnti said.

Taylor said the music students are given the freedom to choose what style of music they want to practice for their recitals.

Todd Strange, applied voice instructor at La Verne, said the music instructors at La Verne try to incorporate classical music techniques into the styles of music the students are interested in.

“The classical technique really protects the voice and… has been there as a foundation on how to sing correctly and healthfully,” Strange said.

Tatiana Tatarinova, associate professor of biology at La Verne, has been expanding her vocal skills from rock to opera and performed “Polina’s Aria” from the Tchaikovsky opera, “The Queen of Spades.”

Tatarinova performs in a rock band and said she’s used to singing in lower octaves, but practicing the theatrical vibratos and higher notes of the Russian opera has pushed her singing confidence.

“We try to cater to if somebody has an inclination or they perform in a certain style of a group already. We work on those but we also try and push to incorporate all the different styles in terms of classical and musical theater,” Taylor said.

Strange said many music schools structure their programs towards only classical music, but because La Verne’s music department opens their music classes to all majors, it allows the students to explore their interests in other genres.

“The cool part is, because people come from all different areas of music and want to improve their skill set… You get a chance to hear different styles of music and it brings a little bit more variety to the recitals that we have here at La Verne,” Strange said.