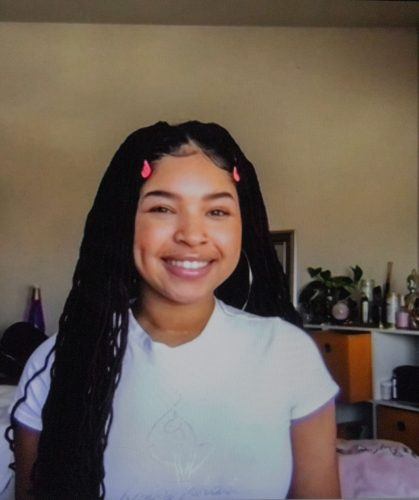 Mariah Williams, recent University of La Verne graduate, shares her journey with the vegan skincare brand Nolaskinesentials on Tuesday. The 22-year-old started as content creator for the brand and was recently promoted to social media manager position, supervising all of the company’s social media platforms including for their Instagram, Tiktok, Facebook and Twitter accounts. / photo by Shira O’Neal-Abend

Social media is used to connect with people across the globe through mutual friends and interests. Williams created a safe space for Nolaskinsentials’ customers by implementing mental health check-ins.

“I wanted to take the brand into a different direction for us to get closer to the customers not only on skin care but on a personal level,” Williams said. “I want them to know we care.”

The 22-year-old was recently promoted to Nolaskinsentials’ social media manager and currently manages various platforms for the brand including Instagram, Tiktok, Facebook and Twitter. Williams scouts influencers that fit the brand’s personality and reviews their feed posts and product pictures. In addition to that, she produces 40 to 50 pieces of her own digital content for the brand.

The growing influencer has collaborated with brands like Baby Phat Beauty, Fenty Beauty, OTZI and Parade, ranging from skin care to fashion, creating video tutorials, and sharing reviews of her favorite products.

Before Williams began doing influencer work, posting product reviews on her Instagram story was something she did for her own enjoyment. During her junior year at La Verne, brands were drawn to the authenticity that came from her content, and Williams began creating videos for their social media, advertisements and promotional emails until she set up a contract with Nolaskinsentials.

At La Verne, Williams studied psychology and eventually created her own child development and psychology major.

“I had this moment where I was like, ‘What am I doing in this major if I find so much happiness and joy creating content and doing this kind of influencer work?’” Williams said.

As a student she was torn between child development and psychology, but Williams found a new passion for using social media to interact with the community in both her personal and professional pages.

The alumna connects her initial interest in the psychological field with her childhood experiences as a Black and Latina woman growing up in East Los Angeles, where she saw firsthand saw the lack of mental health resources in her community.

“It was something I wanted to learn not only so that I could heal my inner child and all the (experiences) I went through, but so I could be more considerate of the younger children in my family and in the community,” Williams said.

Williams said she takes pride in doing her part in the community through donations and voicing social justice issues through her personal social media platforms.

“My dad didn’t read fairy tale books to me when I was little. He read the autobiography of Malcom X,” Williams said. “My dad always made it known what it means to be a Black person and woman in America.”

Melanie Lindsay, adjunct professor for civic and community engagement at the University, said Williams indulged in engaging conversations in and out of the classroom and went above and beyond to create resources as a volunteer for a Latino organization.

“From what I can tell, she is already making a difference,” Lindsay said. “She is one of the future leaders of this generation.”

“She’s really open to views and perspectives from all around the world and all the people she comes into contact with,” David Barilla, Williams’ stepfather, said.

During her time as a student at ULV, she put in effort to attend meetings with cultural groups on campus including Black Student Union and Shades of Essence and saw the importance of representation in a community.

With Nolaskinsentials, Williams makes it a priority to seek brand ambassadors of all racial backgrounds, gender identities and sexual orientations to create a diverse space that is inclusive of everyone.

“We are always shouting out other Black-owned businesses or Black creators. We’re always trying to be inclusive in the kind of people we have on our team,” Williams said.

Michael Hartman, Williams’ boyfriend, has observed that Williams’ social media work has pushed her personal growth and brought contentment. Hartman said creating content that brings attention to the importance of self care into viewers’ lives has done the same for her own.

“It’s a stressful thing to put yourself out there,” Hartman said.

Although she is not currently working in her degree field, Williams continues to incorporate mental health, social issues and of course, skin care, in everything she does.

“I want to go into a job where I have fun and where I am proud of myself and I like what I’m doing,” Williams said. “I’m happy with where I’m at and I want to keep growing.”