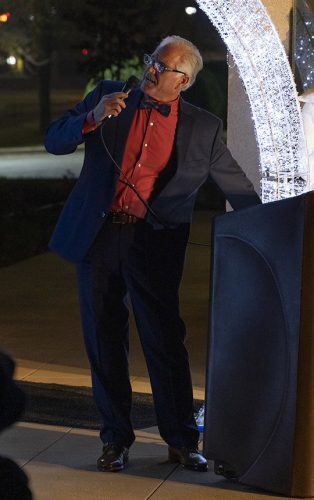 More than 50 community members attended the event hosted by Mayor Tim Hepburn and featuring a special visit from Santa Claus himself.

“We get to listen to Christmas music, you get Santa Claus, you get into the Christmas spirit and start the holidays off right,” Hepburn said.

At the start of the event community members, including kids, police and fire fighters waited patiently as the countdown began.

“We truly live in a blessed city and we’re all very happy to be here,” Hepburn said.

“Let’s all celebrate,” Hepburn said. “Let’s all be safe with our families and let’s reach out to those people that are less fortunate…it’s very important.”

He reminded residents not to let down their guard, given that the pandemic seems far from over.

Sternqusit thanked people for supporting the small businesses during the pandemic.

“Your generosity has kept doors open for so many of your favorite La Verne spots,” Sternquist said. “Even if you shift a tiny percentage of your holiday shopping from big retail to the mom and pop stores … you can make a big difference,” she added.

Finally came the countdown to light up the city’s giant Christmas tree.

With help from two kids, Hepburn began the five-second countdown to push that button that turned on the lights.

The tree lit up with bright white lights that showcased the red and green ornaments as well as the big silver star.

Hepburn then introduced music director Ryan Yoder and the Bonita High School Chamber Singers, who performed “It’s Beginning to Look a Lot Like Christmas,” “Here We Come A-Caroling”  and more.

Yoder encouraged the crowd to sing along to “Jingle Bells” to ring in the evening’s special guest.

And Santa appeared from city hall to greet the excited children that wanted to take a picture with him.

“I’m excited to be home for Christmas,” Mclaurin said.