By Anabel Martinez, Christine Diaz on April 16, 2021 in News 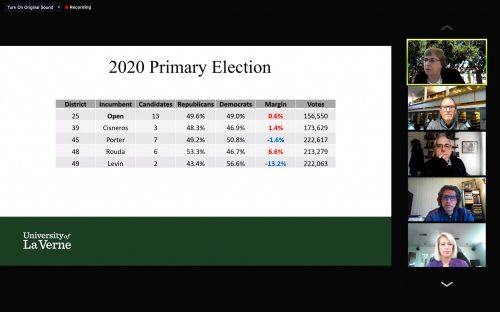 Marcia Godwin, professor of public administration, discussed Congressional districts that flipped in 2020, shifts in voting trends, and the media’s role in the outcomes, with 31 Zoom participants on Tuesday.

The virtual event, hosted by the La Verne Academy as part of its weekly faculty lecture series, featured Godwin’s research analyzing a collection of Congressional districts in Southern California, including districts 25, 39, 45, 48 and 49.

“Going into 2020, you had a major increase in the number of registered voters and what appeared to be a complete uptick in Democratic support. So the results kind of came as a surprise,” Godwin said.

Her comparisons showed Congressional districts that weren’t expected to flip political parties with politicians such as Young Kim winning over Gil Cisneros, flipping the 39th district Republican, which Godwin said hadn’t been expected according to past trends.

“All of these districts, except for the one taken by Michelle Steel, had stronger Democratic support for Joe Biden, in 2020, compared to Hillary Clinton over Trump,” Godwin said.

Godwin credited these results to poor campaign strategies. With the California primary election being scheduled earlier than usual, some voters may have been basing their Congressional votes on name recognition. And with the lack of traditional campaigning due to the pandemic, not every voter was able to fully familiarize themselves with the candidates.

Other factors may have been changes during the pandemic such as the rise in mail-in ballots and voter turnout.

“In 2020, because the Democrats have the House, it’s harder to convince people that they have to vote Democrat to stop the Republican agenda,” Jason Neidleman, professor of political science, said.

Godwin said the Congressional district flips may also be due to voters’ dissatisfaction with political decisions especially during the COVID-19 pandemic.

“If you look at the pandemic and who is affected economically, then that working class, predominantly Latino audience, does seem the most discontented in the 2020 electorate,” Godwin said.

Godwin said when voters are satisfied with the election winners and their policies, they are more likely to be less involved in their political engagement.

“The repealing of a previous ballot proposition that prohibited the use of race and ethnicity in things like college admissions, maybe that brought out a different type of electorate,” Godwin said. “And since two of these seats were Korean American women, maybe there was something about Asian voters that turned out that did it.”

Louise Kelly, professor of management, said she sees a correlation between the amount of consumption of political news and voters’ contentment.

“We know that anger drives the election. So that’s not happiness, right? If you’re satisfied, you’re less likely to [be vocal],” Godwin said. “You’re more likely to vote for incumbents and be relatively passive in your political preferences.”

Godwin said she gets many requests for media commentary from reporters especially after elections, but when the pandemic hit, journalists shifted to covering news regarding the pandemic, the impeachment trial and Black Lives Matter protests.

Godwin recalls one article reporting on how candidates were interacting with the community during the pandemic, rather than traditional campaigns.

“Presumably you were making predictions [just before the election], I’m curious to know how your predictions turned out in the election itself,” Al Clark, professor of humanities, said.

Godwin said she didn’t expect people to vote Joe Biden, a Democrat, for president and vote a Republican for Congress.

“You have a district going Biden, a Democrat for state senate and you go Republican for Congress. You know, this is not supposed to happen in our world,” Godwin said.

Godwin said the pandemic changed the political world, describing the findings of her research as intriguing.