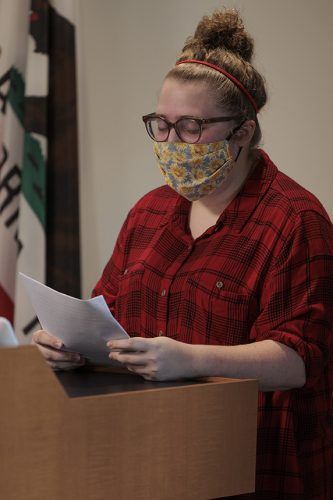 Hannah Cokash, senior creative writing major, shares her short stories at the Winter Fiction Reading Event on Monday in the Quay Davis Executive Board Room. The reading showcased the work of the seniors in the creative writing program. / photo by Brady Keegan

Three University of La Verne senior creative writing majors read their original short stories at noon on Monday at the Winter Fiction Reading in the Quay Davis Executive Boardroom and on Zoom.

Hannah Cokash’s stories “What a Sweet Face” and “His Shadow” left the audience with chills up their spines, while Anika Lotti kept everyone on the edge of their seats with her suspenseful reading of “Intruder.” Emma Garcia had fun with creating strange characters in her story “Recycled” and related to the all-too-familiar experience of feeling average and boring in “The Difficult Loads of Being Enough.”

“We usually have one to two to three readings in a given semester,” said Sean Bernard, professor of creative writing, who coordinated the reading. “Last year, we had a lot because of Zoom. It was easier to get people together …. But now that we’re back together, we’re very happy to have this event.”

Cokash started the event with a reading of two of her short stories, one of which is called, “What a Sweet Face,” and follows the interaction between a young girl and a charming red-haired boy.

The story’s cheery tone flipped when the girl finds out the sweet boy she spent the day with is possibly a murder suspect.

Her second story, “His Shadow,” vividly described the intense fear of a young girl who had been abducted and was left locked up in a pitch black room.

Lotti followed with a reading of “Intruder,” which follows the panic of two new parents doing everything they can to protect their baby from an intruder in their home.

Garcia then read her story, “Recycled,” which featured a variety of characters like The Invisible Children, a beggar and men that were turned into different vegetables and fruit.

She closed out the readings with her second story, “The Difficult Loads of Being Enough,” about a girl who feels normal and average.

“(I wrote this) during a time where I was feeling very insignificant because I was comparing myself to other main characters in books and movies and I realized how much I am not like them,” Garcia said. “So this is a story about the characters in the background.”

After all three readers shared their original works, they took questions from the audience about what they are looking forward to after graduation in regards to writing.

Garcia said she is most excited about the freedom to be able to read more books for pleasure and not just for class assignments once she graduates.

“I just want to take a year off after senior year and get caught up on so many stories,” Cokash said. “I have so many novels in the works. I just feel like a year off gives me time to just write to my heart’s content.”

Lotti said she is looking forward to looking back at feedback for past stories and having the time to fine tune them.

Like many writers, the three seniors agreed that they all have struggled with some form of writer’s block.

“Starting is my biggest struggle, not necessarily like writer’s block because I’ll have the idea, but it’s just actually sitting down and putting something on paper because you have this fear of it not going to be perfect the first time you put it down,” Garcia said. “I think over time, (you realize) it’s not going to be perfect. It’s a work in progress, but something is better than nothing. So just start writing.”

Cokash said the two main struggles she faces is writer’s insecurity and having the inspiration to write, but not the physical motivation or ability to get it down on paper.

“For me, I feel that insecurity of ‘Oh, gosh, what’s this person gonna think of my writing? How’s it gonna come across? Is there too much content? Is there not enough?’” she said.

Cokash said these mindsets can be difficult to get out of but when she faces this, she usually texts a writing buddy or listens to music to get her creativity flowing.

“Something that I struggle with is focus, like in writing, because… I’m ready to write a novel and (supposed to be) short stories,” Lotti said.

Lotti said she also struggles with mixing dialogue and internal or external description.

“Something that I found that I think is beneficial for that is to write the dialogue first because that’s what comes easier to me and then go back and fill all that other stuff,” Lotti said. “Play with it that way and fit it together more like puzzle pieces (instead of) trying to do the whole thing at once.”

Bernard ended the event by thanking the audience and encouraging them to submit work to the ULV undergraduate creative writing contest.

“It’s a great opportunity to get published alongside professional writers in our journal Prism Review,” Bernard said.