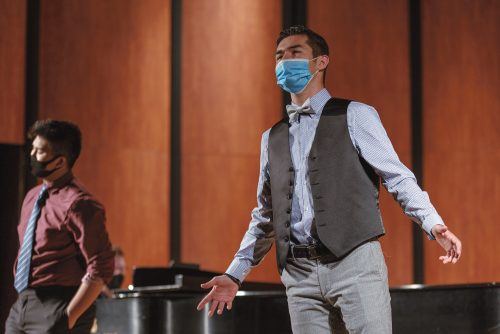 Freshman tenor Philip Matthew Arca and freshman baritone Zachary Grech perform the song “Dear Theodosia” from the musical “Hamilton” as part of the student recital Nov. 19 in Morgan Auditorium. The performance featured 11 vocal performers in all signing a range of music, from contemporary musical theater to classical Italian opera. / photo by Jingyao Liang

The music department held a student vocal recital Nov. 19 for which 11 students performed songs ranging from opera to songs from the musical “Hamilton” before 40 audience members at Morgan Auditorium.

The performances included solos by freshman psychology major Brianna Cristin-Sanchez, who performed “She Used to be Mine” from “Waitress: the Musical” and a song from the musical “Hamilton,” “Dear Theodosia,” performed by Zachary Grech and Phillip Matthew Acra.

“Obviously it takes a lot of courage to come out and sing but if you know you have your best friends sitting in the audience encouraging you, it’s just all the more helpful and just brings us all together,” Julieta Del Toro, junior theater major and performer, said.

All performers stood on stage in front of a bright spotlight and were accompanied by pianist Zachary DeChance as they performed, wearing masks for COVID safety.

Del Toro said singing with a mask is harder than it looks.

“Especially for breathing,” she said. “There’s a barrier so you feel like you need to take a bigger breath, and of course that affects vocals.”

She said she practiced her song, “Caro mio ben” by Giuseppe Giodani, for a month and a half.

“We work with our voice instructorss,” she said. “A lot of the time they give us songs but on some occasions you’ll hear Broadway songs that we actually pick and then we work on.”

“We have a wide range of people,” said Ariel Pisturino, applied voice instructor. “We actually tend to get a lot of biology students, some music people, some theater people, but a wide range.”

She said the students who perform receive private singing lessons from her and the other two instructors, Todd Strange and Courtney Taylor.

“We get together every Friday and we sing and work on stuff and every so often we do a recital…so this is like a culmination of their work,” Pisturino said.

She encouraged others to come out to the next recital on Dec. 10 to support the music department and live music.

“Everybody needs live music in their life,” Pisturino said.

Some of the audience members expressed their thoughts on the recital.

“It was really impressive,” said Imanni Vanderburg, junior criminology major. “I was surprised they had masks but they sang right through it. You couldn’t even tell that they were wearing one.”

She said one of her favorite songs performed was “She Used to be Mine” because of the way the singer’s voice echoed throughout the room.

“I thought it was interesting how the beginning part was Latin and Italian and then it was a switch to English,” Gonzalez said.

She also encouraged others to come out to their recitals because she was also a performer in high school and understands how much hard work is put into a single performance.