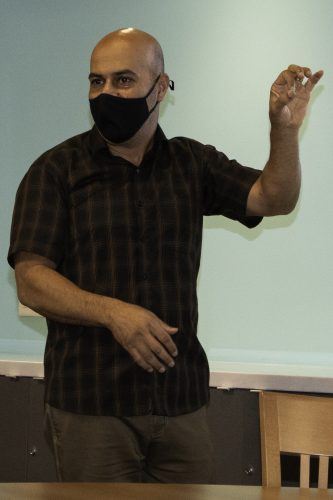 Associate Professor of Mathematics Yousef Daneshbod gives a presentation on mathematics and computing machines Tuesday in the Quay Davis Executive Board Room as part of the weekly Faculty Lecture Series. Daneshbod’s lecture included a brief history of computing machines and concluded with examples of recent student projects involving the machines. / photo by Litsy Tellez

Associate Professor of Mathematics Yousef Daneshbod discussed mathematics and computing machines before about 20 University community members who attended his lecture Tuesday in the Quay Davis Executive Board Room and remotely via WebEx Tuesday.

He started the presentation by sharing a book titled “Men of Mathematics: The Lives and Achievements of the Great Mathematicians from Zeno to Poincaré,”  which he said influenced his decision to become a mathematician.

The book includes the stories of more than 40 mathematicians who lived and flourished throughout the 17th through 19th centuries.

“The interesting thing about this book is it isn’t just a biography, you learn mathematics in this book,” Daneshbod said.

He shared the two types of mathematical devices: analog and digital.

“The first computational mathematical device ever was the fingers,” Daneshbod said.

He also discussed the background of some of the oldest devices, including the abacus and a quipu, which is a Native American calculating device made of a series of strings.

He passed around the room some of his own devices, including a slide rule and the planimeter, which is used to find the area of a section of land.

He also presented a computing device, called a difference engine, which is a series of wheels and gears meshed together used to store and find calculations.

He said the device was created by Charles Babbage and his assistant, Ada Lovelace, who realized the device could be used for purposes besides calculations.

“(Lovelace) is known as the first computer programmer,” Daneshbod said. “She was actually the person who was responsible for introducing software into the device.”

He also shared research of his previous students, including a senior project that set out to predict the movement of jellyfish using calculations.

Another student research project used a high-speed camera to compare the flight differences between insects.

He said mathematical computing devices are also used in biology: Biologists need to break apart cells, and various devices used for calculations can be used to open these cells.

At the end of the presentation Danishbod shared additional research titled: “Two-dimensional elastodynamic and free vibration analysis by the method of fundamental solutions.”

“It was really interesting because he was talking about things I never really thought about like the motion of insects,” said Imanni Vanderburg, junior criminology major, who attended the talk.