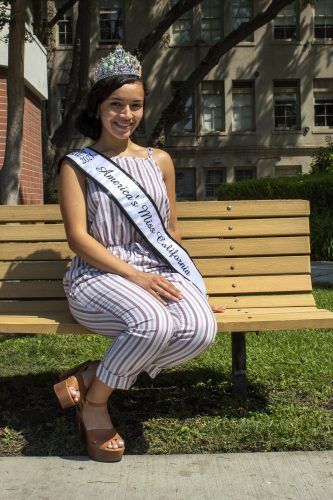 Mariah Lora, senior English major and point guard for the women’s basketball team, has won the title of America’s Miss California 2021. Lora said she wants to show others that they do not have to look a certain way to participate in pageants. / photo by Litsy Tellez

However, the 22-year-old is more than just a pageant winner – she is also a part of different groups like the La Verne women’s basketball team and the Phi Sigma Sigma sorority.

Lora said that despite not being the typical pageant type the reason she participates in pageants is because of the opportunities for networking and career advancement pageants give her.

“It’s not just a crown and a sash, they really want to prepare women for the workforce…and to become professional leaders,” Lora said.

Lora and her pageant director said they also want to change the negative image of pageants and show people the importance and value of pageants.

“I want to show other young women that they don’t have to look a certain way to do these pageants,” Lora said.

America’s Miss California pageant is different from the Miss America pageant, with contestants from various states According to its creators it focuses on professional skills.

“We just want to help them gain some real world skills out of this instead of it all being about how beautiful you are,” Kaitelyne Silver, director of the America’s Miss California pageant, said.

“We want to take the good things that come out of it – like resume building, cover letter building, interview skills, public speaking – and help girls translate that into their real world careers,” Sliver said.

The women participating in the pageant were judged on four components – pre-stage interview, evening gown, personal intro and on-stage question. They also must choose a platform and cause to advocate for.

Lora, who transferred to La Verne from Cerritos College, said her platform is encouraging students to seek out higher education in order to make their dreams come true.

“I’m the first in my family to be graduating from a four-year (college)… so I’m big on making sure you’re pursuing any kind of education,” Lora said.

“She’s made a big impact in my life…she’s helped me vocalize my opinion more and take up some space,” Idalys Flores, sophomore psychology major and Lora’s sister, said.

When Lora said when was crowned she was excited mostly because she wanted to start giving back to the community as soon as possible.

“When I won I was like, ‘All right, let’s start executing these goals’,” Lora said.

Some of her goals for this year as a representative of her pageant are to make a scholarship fund for underprivileged children and to give at least one student a scholarship to study abroad.

“I was given the opportunity to do that in junior college so just being able to give back in that caliber would be amazing,” Lora said.

Lora said she likes to keep busy and her favorite part about participating in so many different groups is being able to spend time with different kinds of people.

“I enjoy talking to so many different people because everyone’s story is so unique and different,” Lora said.

“She can relate to a lot of people,” Lora’s mother, Raquel, said.

However, Lora also has a lot of long-term goals for her career. She plans to become an English teacher and even spend the summer teaching underprivileged fifth graders. She eventually wants to become a superintendent and potentially pursue a law degree as well as even run for city council.

Lora said she always returns to her mom’s saying, “If not you, then who.”

She said she also wants to encourage anyone who might be considering participating in pageants or any other kind of extracurricular.

“Don’t be afraid to step out of your comfort zone and be comfortable with being uncomfortable, when you’re uncomfortable that’s where the magic happens,” Lora said.