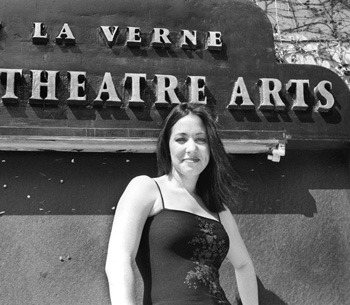 Jessica Wotherspoon, senior theatre arts major, recently directed “Courting Prometheus” by Charles Forbes for her directing project. She is currently working in the spring production “La Ronde” by Arthur Schnitzler where she will play the Poet. When Wotherspoon is not acting and directing, she is a singer for the ULV Chamber Singers. / photo by Juan Garcia

Jessica Wotherspoon has finally surrendered. The University of La Verne senior confronted her doubts and insecurities and declared her major in theater.

She said she has always had an interest in stage performance but denied it as an option for her major.

After attending junior college for one year and California State University at Fullerton for another year, Wotherspoon transferred to ULV in 1996 to start her academic career over. Since then, she has declared majors in dance, English, psychology, and a variety of other fields.

Part-time Theater Director and Professor Georgij Paro has an analogy for theater majors. Wotherspoon said he tells his students and cast, “We use theater to understand life, like English majors. What they get through literature, we get through plays.”

“There’s little risk in being an English major,” Wotherspoon said. “I figured I could always teach. Theater is so uncertain. It scares me to death.”

Wotherspoon said she realized uncertainty and risk was what theater was about and she was intrigued by it. She got involved with theater at La Verne as an extracurricular activity. She acted in one of the Dailey Theatre productions and she said her enthusiasm grew from there.

She has completed 11 ULV plays during her existence as a Leopard and was cast this week as a character in her 12th. She said her most memorable act was in “Pains of Youth,” directed by Paro, who is from Croatia.

“I think ‘Pains of Youth’ was my first time stepping out of myself. This character gave me some weird kind of strength. It enabled me to lose myself. I was so disconnected with who Jessica was,” Wotherspoon said.

She says her ultimate challenge will be found in her newest character in the upcoming “La Ronde.” Unlike her ultra feminine standard personalities of the past, her latest character transforms her into a man, therefore forcing her to expand her horizons and truly test her ability.

Wotherspoon has recently completed a project that was assigned in her directing class. She tested out the role of director in her play “Courting Prometheus” that debuted Friday and Saturday in the Dailey Theatre.

She describes “Prometheus” as a dramatic attempt to encourage taking risks that often deter individuals from getting involved in relationships and commitment.

There may be a personal lesson in this one for Wotherspoon. The play possibly supports her decision to override her doubts for her passion, and commit to the possible risks she may incur.

“Theater to me is not just what I do, it’s my passion,” said Wotherspoon.

There is proof that she takes acting seriously. Last semester Wotherspoon was nominated for an international award called the Irene Ryan. This qualified her as a participant in Las Vegas at the Kennedy Center American College Theater Festival.

She said she credits the competition along with auditions for theater calls and the musical “Rent” with adding experience to her resume.

In addition to curtain calls and casting, Wotherspoon continually involves herself deeper in dramatic atmosphere. She is currently a member of the University Choir and also a participates in the Vocal Ensemble under the direction of department head Shawn Kirchner.

Previously, she evolved through different types of dance: jazz, ballet, tap and hip hop. In addition, she has coordinated the choreography of plays, cheer squads and small dance companies.

In the future, she said she hopes to integrate all of her experience together.

“I would love to have the beginnings of a new theater company. My big goal is to open an academy for children and people my age,” said Wotherspoon.

She said she would like the chance to give others something they could take with them forever. She said her mentors from the Theatre Arts Department at La Verne all have contributed to the success that she has earned thus far and she thanks them – Jane Dibbell, associate director of theatre arts, for getting her into the department; Dr. Flaten, for giving her a chance; Paro for making her believe she had something special; Steve Kent, adjunct professor, for showing her how to work; and Beth Pietrzak, technical director and resident lighting designer, for teaching her the technical process and design.

Wotherspoon said she believes people are given things in life to work with. She said there is a reason for it all so make the best of what you are given, “TAKE IT AND LIKE IT!”