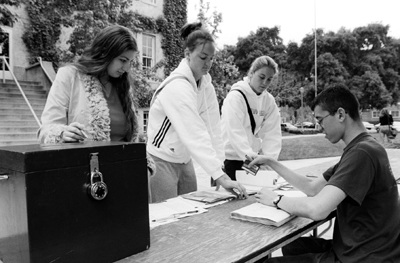 A banner hanging near the poster kiosk encouraged students to “revote for A.S.F. elections,” held on Tuesday and Thursday by the school seal. The first election results were invalidated by ASF on suspicions of voting manipulation. Voting were Kim Reed, Emily Tollefson, and Katie Aimone served by ASF representative Rich Uranga. / photo by Juan Garcia

Following allegations of logistical problems and rumors of voter manipulation, the Associated Student Federation Forum elections were postponed last week and held this Tuesday and Thursday.

“We didn’t have elections (last)Wednesday and Thursday,” said ASF spokesman Richard Uranga who is also the forum’s election chairman.

Uranga also ran for the only contested office ­ public relations in this election. The other candidates were Sarah Negrete and Ebony Lofton.

“Most everyone in ASF is running for something, and isn’t in the position to help and I still got the job done to the best that I could,” Uranga said.

All other positions are uncontested, including the office of the Presidency, which will most likely fall to junior Kimberly Reed, the incumbent.

“I really, actually wish that I had opposition, because it would make it more legitimate,” Reed said.

The elections were stopped last week after the first day of voting, when students and candidates brought their concerns about voter manipulation to Uranga and Deborah Gordon, director of student activities which commuter programs.

“There were allegations that voters were told how to vote by various parties,” Uranga said.

According to Reed, however, an investigation of the allegations turned out to be inconclusive.

Last year’s ASF elections were also tainted with allegations of voter tampering and resulted in a revote.

Uranga said he is confident that new measures will keep any more problems from occurring with this week’s elections.

Students will now have a separate, private area in which to vote in, rather than vote in front of the person handing them the ballot. There is also talk of creating an official stamp to prevent voter fraud.

The importance of the ASF forum as a governing body is significant, as every year, the forum is given a large sum of money.

This year, for instance, it totaled over $150,000. Some of the money comes from the $100 student activity fee that every traditional undergraduate student is required to pay.

With these funds, it is a wonder that more students do not run for seats on the forum.

Only two people ran for commissioner positions, which make up the Activities Board and are instrumental in coordinating annual events like Homecoming and the Winter Formal.

“It would be best if there were more people up for commissioner positions,” Uranga said.

While most seats were uncontested, candidates still need a minimum of 75 votes to win.

The requirements to run for any position include a 2.5 grade point average, and for an executive position one year of ASF experience is mandatory. Duties on the forum include attending a weekly meeting, helping coordinate campus events and voting on how to allocate student funds

Besides the activities board, there is the advocacy board, which coordinates educational events on campus. Each board is presided over by a vice president.

As a result of the shortage of candidates, the forum will most likely hold special elections in the fall, where the forum is the only body that votes, as opposed to the entire campus voting.

The first day of last week’s elections proved fair, as voter turnout was higher than expected. “I was impressed because we had more votes than I thought there would be,” said Uranga.

Uranga hopes that those students who voted in the first set of elections will vote again.

“I would say that I am positive that those determined students will vote again, but there will be very few that will have reasons for not voting again.”

Next year, the Forum will most likely hold special elections to fill vacancies and bring in more students.

“For students who want to get involved next fall, ASF is a perfect opportunity to really understand how things in college, here on campus at ULV, how things work,” Uranga said.

“It’s really a fresh start, it’s the first step towards someone who wants to try to take a change and learn to be a leader. Learn to be a public servant.”

However, if students do not wish to run for an office, they should vote.

“They can determine and contribute to the process of how their students leaders get elected. That’s where they can the power,” Uranga said.

This year the Forum has been responsible for several events, including the Commuter Faire, speakers Jim Carroll, Kerry Kennedy-Cuomo and Dan Powell, coordinating a panel discussion with administrators and staff.

“That’s the most important thing to have, a dialogue,” Uranga said of the discussion.

While controversy surrounding irresponsible ASF spending was in the air, Uranga is certain that the Forum met most of its goals.

“Whenever we discussed things at meetings we totally thought of what would be most fair to students. When it comes to what students would want, and we’ve tried to spend money fairly with students,” he said.

As for joining ASF, Uranga advises his peers and ULV students, “Anyone can do it, it’s not that complex.”