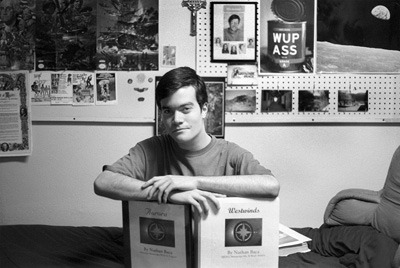 Freshman Nathan Baca has been given the run around, the cold shoulder, and even been threatened with law suits, all because he followed an instinct that most reporters and writers would only dream to attain.

The article written by Baca was inspired by an eyewitness to the misdealing of election ballots. Baca went to his journalism adviser a few days before their deadline, and said, “I’ve got some stuff, but don’t know if I should go with it in print.”

The adviser confirmed his journalistic instinct and told him, “just go with it.”

Throughout his high school years Baca worked on a manuscript entitled “Westwinds.” The work originally started as a 20- page assignment but when completed ended up being roughly 60 pages.

The title came from a local horse ranch in the Ventura area, which plays a significant role in the setting of the work.

Baca decided to continue writing “Westwinds” and to turn the assignment into a four-year reflective autobiography of his high school career.

Baca said, “After a while it gained a life of its own,” and said he continued writing with such a passion because, “it was the whole grand idea of something to call your own.”

According to Baca, “Westwinds” has always been an issue with some of his high school peers because they were offended by what he wrote.

“Westwinds has always been a very controversial work, because from the get go, it was as accurate and hard hitting as possible.”

Because the people who read the book at Ventura High School were so critical of what Baca wrote he was “looking at being suspended, expelled, threatened with lawsuits, everything.”

Baca’s work was frowned upon because he modeled the characters after real people in his life, and used their actual names within the novel.

Baca was also open in revealing personal issues about those people. He mentioned one character who had a problem with drugs and suicide. Another character claimed to have such issues, but later it was discovered, and revealed in the book that they were false, and only used as a cry for attention.

“There were people who wanted to see that book destroyed,” Baca said. He tried to write as accurately as possible, and kept most of the dialogue word-for-word.

The work turned out to be more than just a daily diary, but more so a “calling.” Baca described it as “the largest letter I’ve ever written.”

Because of the threats and complaints Baca received regarding his work, he took Westwinds “underground.”

“My autobiography was, in many ways my life, and I basically had to hide it, I had to take it underground,” Baca said.

Baca said he no longer discusses his work openly at school or around his peers. He only worked on the manuscript at home, in solitude. “I was almost living a double life. A student by day, and by night I was at home writing a book, and no one knew.”

At that point, Baca said, “A lot of people thought they won and had killed off “Westwinds.”

Baca completed the work on May 29, 1999, and describes that day as one of the happiest of his life. When he finally brought “Westwinds” to a close, Baca said “I could do anything I really wanted, as long as I put my mind to it, stayed focused and was determined enough.”

The thought of going to the press and publishing the book has crossed Baca’s mind, but he is still not sure. A small publication group in Philadelphia has expressed an interest in the work, but Baca said the future of “Westwinds”‘ has not yet been determined.

Baca brought “Westwinds” with him to ULV, and said, “here in La Verne, ‘Westwinds’ has been met with open arms.”

After showing his book to a few students and faculty members, Baca believes that the college atmosphere is just what “Westwinds” needed. “Ultimately what I get in return is criticism that makes the book stronger,” Baca said.

Baca is working on the sequel to “Westwinds” entitled “Aurora”, which means “dawn” in Latin. This book is all about the beginning of a new era in Baca’s life. Since he has already covered his high school years, he now focuses his writing on his current experiences in college.

On occasion, writers experience something called “writer’s block,” but Baca experiences something synonymous that he calls, “‘Westwinds’ Syndrome.” He said that the average for his writing in college is about one page each day, but on the first day of school at ULV he wrote 18 pages.

Baca said that in order to make his book interesting he takes “small everyday things with love, friendships, challenges and school” and includes them so others can see that everyone goes through the same things.

One of Baca’s main inspirations was author Anne Dillard, who wrote “American Childhood”, the novel assigned by Baca’s high school freshman english teacher just prior to the assignment that turned into “Westwinds”.

Baca said, “I don’t pretend to be a great writer,” and that is why he accepts criticism from anyone who reads either of his books.

According to Baca, a lot of people think about writing a book, but lack the inspiration. He just decided to go with the feeling and write about his life.

Baca said, “Everybody’s life has some bit of a novel in it.”