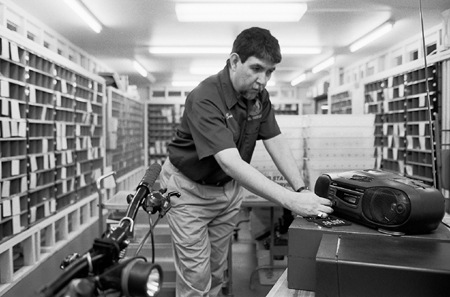 Ernie Granillo’s home at the University was the student mail room in the Supertents. Granillo died Saturday. He performed in many theater productions and was a 10-year employee at ULV. A tribute will be held for Granillo in the Dailey Theatre today at noon. / file photo by Juan Garcia

Mr. Granillo worked at the ULV mail center and was known as a friend to the students on campus.

The mail center window where he greeted students daily with a smile is now closed and a candle burns on the outside in his memory. A card is placed next to the candle and has students’ signatures and thoughts written in remembrance. A sign on the window says, “We remember Ernie as a passionate and caring friend.”

While working in the mail center, Mr. Granillo would often exemplify his artistic character by listening to diverse music such as rhythm and blues and alternative rock.

Hilary Hahn, a senior theater major, said Mr. Granillo delivered her mail to her for four years in the theater department so she did not have to pay the fee to get a new key.

“When I would see him around campus he would always be curious and excited,” said Jane Dibbell, associate professor of theater arts.

“He loved the University and said it had such a rich environment. He was always very supportive,” she said.

He was in many theater productions including “Don Juan,” “Naughty Marietta,” “Pericles” and “The Unreasoning Mask.”

Before joining the ULV community, Mr. Granillo spent time in different parts of California. He grew up in a part of Los Angeles called El Sereno and attended Cathedral High School, near Dodger Stadium.

“He was always happy and making the most of every day,” Dibbell said.

A video tribute will be held for Mr. Granillo in Dailey Theatre today at noon and students will have a chance to share memories and experiences of him. Clips of Mr. Granillo’s theater productions will be shown and a folk band will perform as a tribute to a dream he had of bringing folk music to the University.

Contributions can be made in Mr. Granillo’s memory to University Relations.