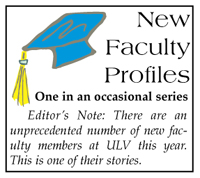 Last summer a teaching position in the psychology department at the University of La Verne opened and gave one professor the opportunity to shine.

Although much hard work is involved, Scott is enjoying his first year at ULV.

Scott received his bachelor’s in education with an emphasis in speech and language pathology.

Through an internship in his undergraduate years, Scott worked with underserved populations and became an advocate for them. He influenced them in terms of speech problems, but discovered that he affected them in other ways as well.

Scott chose to study psychology because of the influence he could have on human thought. However, Scott did not dismiss other areas of study. He incorporated sociology and anthropology classes into this field.

Although he studied three years as an undergraduate in St. Louis, Mo., Scott chose Oklahoma for his senior year of college in addition to the home of his graduate studies.

Scott received his Ph.D. in clinical psychology in 1996 from the University of Tulsa.

One factor that greatly influenced his choice to study in Oklahoma was his heritage.

“My maternal grandmother was a full-blooded Native American from the Choctaw tribe,” Scott explained.

Scott was interested in his family background and believed that Oklahoma would be a great learning ground to dig into the past.

He explained how the “Trail of Tears” and Oklahoma played an important part into understanding his roots.

Scott, a St. Louis native, is enjoying his 10th year in California.

His choice to come to the sunshine state was motivated by many factors. In addition to the fact that he had family in San Francisco, Scott was also attracted by two personal opportunities.

One was the chance to study Buddhism, and the second was the opportunity for a prestigious internship at the University of California, Irvine.

“I like a lot of the philosophical foundations of Buddhism,” Scott said.

He said that it is different than practicing a Western religion.

He was exposed to Hinduism during his stay in Oklahoma, but it failed to satisfy his thirst.

Scott also said that because Buddhism links with psychology, it has become a growing area of interest.

The diversity of cultures in California has allowed him to study this topic further and incorporate it into his life.

Scott has integrated cultural diversity into a class he is currently teaching.

In the Advanced Multicultural Competency class, a doctoral course, ULV psychology students learn counseling approaches to use for minority groups. Many times this leads to empowering people, Scott said.

“It takes psychological theories and looks at them from the perspective of multiculturalism,” Scott said.

Since starting at ULV, Scott has been active in many activities. He is one of the faculty advisers for the Gay, Lesbian, Bisexual, Transgend Alliance.

He is also an advisor for the Institute of Multicultural Research and Campus Diversity in addition to being involved in the Coalition for Diversity.

He enjoys working with IMRCD because it encompasses program and curriculum involvement, as well as advocacy.

He was also invited to become the chair for the Psychology Institutional Review Board, which ensures that the rights of human subjects in psychology are not violated.

As a member of the American Psychological Association for seven years, Scott has enjoyed working for that organization as well.

Two months ago he was appointed to the Grant Application Board of the Office of Minority Health, at the national level, for work done in communities and research projects.

In addition to teaching and being a clinician, Scott also enjoys research.

In particular Scott researches the different uses of methamphetamines on different populations.

Working with the Integrated Substance Abuse Division, Scott had to modify a treatment that could be used by various groups.

They approached this problem through a national project in which they traveled to different areas, including Hawaii. Following the study, Scott wrote a chapter on substance abuse in Addiction Recovery Tools.

“He is an all around professional,” said Aghop Der-Karabetian, professor of psychology and associate dean, college of arts and sciences.

“He is gracious and willing to accommodate us. Students have said good things about him.”

Der-Karabetian also said that he is appreciative of Scott’s involvement outside of the classroom.

While holding a temporary position at the university this year, Scott has applied for an opening in the psychology department for next year.

Applicants will be interviewed for this position starting next Friday.

Aside from teaching and involving himself at ULV, Scott has also been busy flying to different locations across the country for various interviews.

Scott wants his students to take the concepts of ecological psychology and incorporate them into western theories of philosophy.

By doing this, it will allow students to reach the next step.

“I want them to move beyond the narrow focus of an individual,” he said.