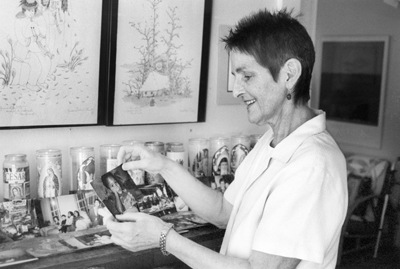 Jane Dibbell’s home is filled with an eclectic collection of art and memorabilia. Among these treasures are pictures of her former students’ children. Dibbell is returning to the University of La Verne after a three-year hiatus from the Department of Theater Arts. / photo by Bailey Porter

Not many people are capable of being in two positive, yet completely opposite, states of mind at the same moment. Nor are some able to appreciate life and yet accept the possibility of death by living for the moment, every moment. It should be considered a gift then, to be able to live in this manner.

One woman has this gift.

When she walks into Dailey Theater a sense of fortitude, and serenity enters with her. It is in her eyes that the genuineness of her character is present.

In 1998, University of La Verne Associate Professor of Theater Arts Jane Dibbell was directing the play “As You Like It” when she received the news that changed the way she looked at life. It was at this time that she was diagnosed with stage-four breast cancer.

After leaving in 1999, Dibbell has decided to return to ULV this year to continue passing on to students what she has experienced and learned through acting and through life.

It has been less than two weeks since she returned. And so far she feels good about her decision.

“First of all, I wanted say how welcomed I felt when I walked into the faculty meeting,” Dibbell said as she recalled the applause she encountered the morning of the meeting.

She discussed how John Gingrich, dean of the College of Arts and Sciences, talked about teaching from the heart.

Gingrich, who has known Dibbell for 12 years, explained that what she was referring to was from a book by Parker Palmer. It supports the idea that teaching does not only involve the mind, but emotions and the heart as well.

“Well, she’s a gift to the University. It’s just so wonderful to have her come back because she has a lot of insight, not only about her discipline, but about life,” Gingrich said.

Although she has been absent for three years, she is amazed by what has flourished in the theater upon her return.

“We have a wonderful group of theater students,” said Dibbell.

She added that the students lacked cynicism and that they are open, curious and willing to try her ideas.

“They always look at what’s possible. They’re willing to give it a go,” Dibbell said.

Anticipating the coming year, she is excited to be part of the events the theater has planned. She is also eager to get the students to try out the theory of emotion she has been researching for her book “Stepping In and Stepping Out: Conscious Emotions for the Actor.”

She hopes to publish her book sometime this semester, but is currently having a difficult time finding a publisher. She added that anyone that has information or ideas about publishing should feel free to contact her.

Excited about the new faces in the theater, she is also looking forward to the work the theater faculty has done in collaboration with other disciplines.

One of these is the effort between the Music and Theater departments to put together a musical every year. In addition to this, Steve Kent, visiting professor of theater arts, and Don Pollock, professor of communications, are working together to create “Acting for the Camera,” a class that will debut in spring which will enable the Theater Department to work with the Communications Department.

This semester Dibbell will be teaching oral communication. She is also thankful that she will be able to co-teach the acting studio class with Kent.

Upon coming back, she is also grateful to witness the maturation of the students she had directed in 1998.

While away, Dibbell said that she was aware of the support she was receiving.

“And I want to thank everybody for their thoughts and prayers,” Dibbell said.

When she had first been diagnosed, one doctor gave her only months to live. Four years later, she has learned how to live with the uncertainty of not knowing when she will make the “big trip”, as she referred to it. She has learned to live in the moment along with seeing the lighter side of living with uncertainty.

In continuing to look toward the positive in her life, Dibbell has discovered many blessings in doing so.

“It has given me the opportunity to heal and to bring the family together,” she said.

In addition to this, she has found another blessing in a somewhat smaller package. Her 16 month-old granddaughter, Lola brings her happiness, and Dibbell enjoys spending time with her.

Dibbell is not the only one that has uncovered the good in life; the theater department has also been able to find a blessing in her.

“It’s just the pleasure of her presence, daily,” professor of theater arts David Flaten said. “I’m just delighted to see her everyday. She’s just a beautiful person and a beautiful soul and just to have that vibrancy back here is just a lift for the students,” he said.

Over the years Dibbell has tried numerous treatments and has been prescribed many medications. She has also tried alternatives to traditional treatments. These included attunement, Reiki, DNA, sound therapy and massage therapy.

“She’s beaten the odds and it’s because of the work she’s done on herself. It’s no accident that she’s here,” Flaten said.

She also does dancing exercises to stimulate the oxygen and to get it flowing throughout her body and to her brain.