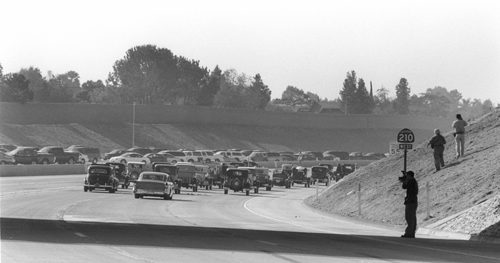 Fourteen new miles were added to the 210 Freeway on Sunday, Nov. 24. The freeway, presented by the San Bernardino Associated Governments (SANBAG), formerly ended at Foothill Boulevard and now extends to Rialto. Mayors from SANBAG cities cut the ribbon on the freeway while driving vintage cars. It was reported that at 7:30 a.m. on the day of the opening, the freeway saw its first accident. / photo by Jennifer Contreras

Local politicians, Caltrans workers and the public witnessed the opening of the continuation of Interstate 210.

The long awaited opening ceremony was Nov. 24, and entrance to the public was limited.

The first to speak was Maria Contreras-Sweet, secretary of the Business, Transportation and Housing Agency.

“This is a joyous moment, so we must take a a moment to pause (and) remember the men and women that made this possible,” she said.

She said Caltrans understands the needs of the public and that Caltrans developed a freeway that would link cities together.

To counteract noise, she said that sound walls were put up before construction began.

Also, Caltrans constructed a carpool lane to address the issue of pollution. 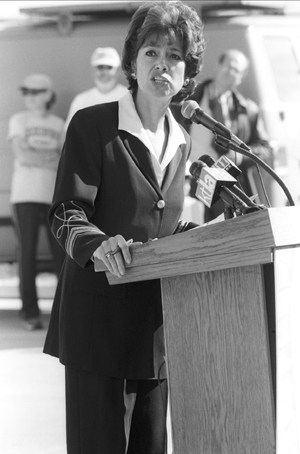 The ribbon-cutting ceremony of the 210 Freeway extension on Nov. 24 featured keynote speaker Maria Contreras-Sweet, the secretary of business, transportation and housing for California. Contreras-Sweet, the first Hispanic female to hold this position, said the time individuals will save using the new freeway will be used to benefit the community elsewhere. / photo by Jennifer Contreras

Contreras-Sweet said the freeway saved one truck driver 20 minutes when traveling in one direction.

She suggested that if drivers are saved 40 minutes in a round trip, the time saved could be used to spend with their family.

“To me, this is the biggest thrill I have had,” he said.

A ribbon cutting ceremony followed the speeches. Spectators standing on the Monte Vista Bridge above the freeway watched the speakers, councilmen and women drive classic cars on the westbound lanes.

Included in the parade of vehicles was an old fire truck used when La Verne was known as Lordsburg.

The freeway was open to the public that evening.

This is the second of the three parts of the 210.

The first part is a six mile corridor that runs from Sierra Avenue in Fontana to Day Creek Boulevard in Rancho Cucamonga. It was opened in August in 2001.

The second part, which recently opened, runs from Day Creek Boulevard in Rancho Cucamonga to Foothill Boulevard in La Verne.

This stretch runs 14 miles and has three lanes in each direction.

In addition to these lanes, a carpool lane, which is for two or more people per vehicle, was built in each direction as well.

The cost of this portion of the freeway totaled $1.1 billion, Donahue said.

The freeway was constructed with “long-life pavement,” which should add an extra 20 years to the average 20-year lifetime of the pavement.

Donahue said that this should make the ride smoother and enjoyable for the amount of drivers expected.

The opening of this section of the freeway is expected to be a congestion relief for Arrow Highway, Foothill Boulevard, Baseline Road and Interstate 10.

According to a press release, the opening of the 210 will relieve traffic on the local streets by removing 43,000 vehicles from them.

So far, University of La Verne students have positive opinions about the 210 freeway’s opening.

“I love it. It cuts my time in half, literally,” said junior Joy Helou, who commutes from Rancho Cucamonga.

“I go on it (the freeway) for fun,” said ULV student Payam Parchamazad.

The third part of the 210 freeway will be an eight-mile stretch through the cities of Rialto and San Bernardino.