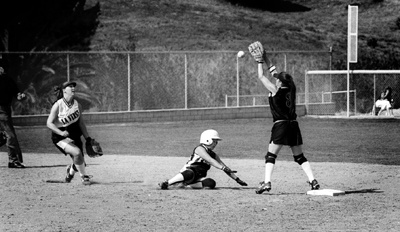 Nancy Matthews, third base, and infielder Kourtney Tomlinson caught April Vela of Whittier in a pickle between second and third during the second game of a doubleheader at Whittier last Saturday. After winning the first game 12-0 in the fifth inning, La Verne went on to win 10-0 in the second game. / photo by Amy Babin

The University of La Verne women’s softball team had an impressive performance last week sweeping conference opponents and gaining two wins in the Chapman Tournament in Orange, increasing their record to an impressive 17-0-1.

The Leopards defeated Whittier by the 8 run mercy rule all three times during the weekend.

On Saturday, the Leopards shut the Poets out 12-0 in game one.

Sue Whitcher had an exceptional day at the plate, going 4 for 4.

Whitcher started game two in the pitching circle and knocked out two innings for the Leopards and Tillema finished it off the last four.

Gina Meza and Kourtney Tomlinson each contributed to the Leopards offense going 3 for 4 in game two.

With the Leopards solid defense they have yet to be scored against in conference.

“Everybody works well as a team, we are definitely getting the job done,” senior infielder Kim Schrepfer said.

They competed against Mercy College in game one and defeated them 14-0 in five innings.

“There are some good teams in the tournament, but we expect to win every game,” Schrepfer said.

Freshman Chrissy Zehrbach pitched a no hitter only allowing one walk.

In game two one Monday night La Verne was matched up with SUNY Utica-Rome and defeated them by the mercy rule 16-0.

“We have a confident and promising team. If we stick together we should be able to achieve all our goals,” sophomore Paige Hanawalt said.