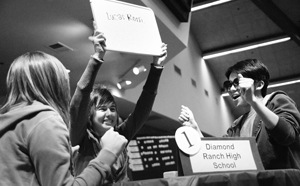 Dancing with victory, Diamond Ranch High School was the only team to answer the question “Who was the winner of ‘Rockstar Supernova’?” correctly in the popular culture trivia game, Trivia Bee. Diamond Ranch, represented by Alex Soiseth, Robyn Ollodort and Neal Mok, took second place out of five high schools, losing by just one point to Garey High School’s Kelley Le, Kevin Rodriguez and Rodney Perez. After the High School round of the Trivia Bee, the adults took a turn to show their knowledge at the 17th annual Trivia Bee held on Nov. 8 at Fairplex. The Associated Pomona Teachers team won the adult round. / photo by Kelly Rivas

An audience of more than 100 gathered in the Hinds Pavilion at the Fairplex to watch local high schoolers and adult club teams tout their knowledge of the arts, current events, sports, science and more.

“The questions are based on real questions we receive at the reference desk,” said Pat Lambert, adult reference services supervisor at the Pomona Public Library, who helped compile the questions for the Trivia Bee. “We read and did research for the most interesting facts and kept up with current events.”

Contestants huddled together at small tables, which were draped with colorful tablecloths and accented with bright balloons.

Each team of three had a limited amount of time to answer questions by writing on their mini-whiteboards.

Grey’s Anatomy, the stars in the Big Dipper, MySpace and the color of Paul Bunyan’s ox came together as answers.

“For the high school questions, we took more from popular culture,” Lambert said.

The students raised their whiteboards with lightning speed and other times mulled their answers till the Quiz Master demanded a response.

Alternately huddled together scratching their heads, or victoriously dancing in their seats, the high schoolers were encouraged by applause from the audience.

“We thought the questions were really easy – but we thought it would be harder – so we kind of overthought our answers,” said Nallely Tinajero, a 17-year-old senior from Pomona High School who joined the team just that day.

To break a tie for third place, Pomona Catholic and Ganesha, went head to head in “sudden death.”

The adult club teams brought a different level of competition and questions.

“Many of these teams have been playing for a number of years and can get very competitive,” said Muriel Spill, the Pomona Public Library service manager.

The teams competed in two rounds with the three top placers in each moving on to the third round to vie the first place title.

A troop of kangaroos, the broccoli capital of the world, Tom Hank’s Oscars, komodo dragons and the last president to ride in a horse and buggy to his inaguration were question topics tackled by the first round.

Friends of the Pomona Public Library emerged victorious for third place in a sudden death with the Pomona Host Lions Club answering correctly that Russia is nearly surrounded by the White Sea.

A paddle of ducks, cheetahs, the location of Puccini’s “La Boheme,” a perfect score in bowling and the first Super Bowl combined as answers challenging the second round of adult club teams.

Jokingly pretending to cheat with their walkie-talkies, the Pomona Police Department provided humor to the competition and were the end of many teases.

The Pomona Breakfast Lions Club took third after a sudden death with the Friends of the Pomona Public Library II for second place. The Pomona Municipal Management Club took first.

Round three, which combined finalists from round one and two, had slightly different rules: after three wrong answers a team was eliminated until the last one was left standing alone.

Teams staggered out of the running with topics ranging from the “Sound of Music,” CBS and Warner Bros., and shoe fashion.

Friends of the Pomona Public Library II and the Pomona Breakfast Club competed in sudden death for second and third.

The winning question – Japan’s favorite pizza topping, squid – was taken by the Friends of the Pomona Public Library II giving them second place.

In their second consecutive win, the Associated Pomona Teachers won the Trivia Bee.

“The primary thing is that the teams have fun by coming and using knowledge and having good sportsmanship,” Spill said.

Nicole Knight can be reached at nknight@ulv.edu.