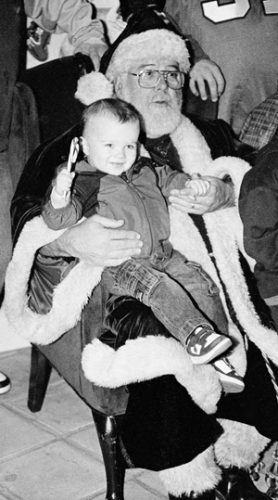 Dekoda Davis traveled with his parents from Victorville to see his grandpa, Richard Davis, as Santa Claus. Besides visiting Santa, spectators enjoyed the lighting of the giant Christmas tree in front of La Verne City Hall, and caroling by the Bonita High School Chamber Singers. / photo by Kelly Rivas

For a second, the small town of La Verne became a Christmas card picture, with a community huddled around looking at the tree’s lights.

The busy atmosphere of the nearby traffic faded away, leaving families listening to Christmas carols and children waiting to see Santa Claus.

The ceremony started at 6:30 p.m. with Mayor Jon Blickenstaff giving a short speech.

He commented on the arrival of the winter season with its brisk evenings and acknowledged the troops that are stationed overseas and gave hopes for their safe return to their families, especially with the holidays being close by.

“We need to remind ourselves of the gratitude that we need to feel for the measure of peace and security that we have in our country based on the work that the men and women in the military service are doing day-in and day-out all around the world,” Blickenstaff said.

On his mark, the crowd started the countdown from five.

Once the countdown reached zero the button was pushed and the multicolored lights of the tree were welcomed by the crowd’s applause.

Although the building obstructed the view of the tree for some, the top of the tree could still be seen.

“You couldn’t see, so I leaned over,” said Eric McHugh, a tiger scout, after the tree lighting ceremony.

He and his mother, Tiffany McHugh, enjoyed meeting Santa and singing “Jingle Bells” with the Bonita High School Chamber Singers.

The Chamber Singers sang a selection of familiar Christmas carols ranging from “Joy to the World” to “Deck the Halls.” Children and adults joined in the singing of “Jingle Bells” at the singers’ request.

“I like that it was a community event,” Trish White, La Verne resident, said. “I think it’s fantastic. Tradition is very important; it brings the community together.”

As the Chamber Singers finished their carols, children began to line up to meet Santa Claus while others joined the council in a meeting.

Santa and Mrs. Claus sat in their chairs next with a living room background decorated with stockings and lighted garlands.

Children were able to sit on Santa’s lap and pose for a picture while Mrs. Claus handed out candy canes.

Even Miss La Verne stood in line to have her picture taken.

“It was on time, that’s important,” said Margaret Aleman, La Verne resident. “They had something for everyone.”

Campus Safety, LVPD crack down on parking
He’s just not that kind of guy